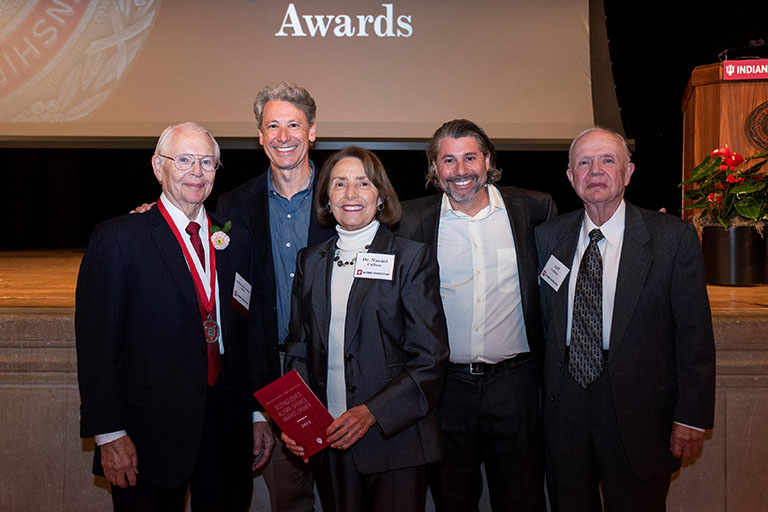 A Global Journey Begun in Bloomington

From Beck Chapel to Moscow, from the height of the Cold War to the fall of the Iron Curtain, James and Naomi Collins have shared a lifetime dedicated to international relations and public education, one which began with their time as graduate students at IU Bloomington. With the gift of their respective professional papers and other materials to IU Libraries, the couple’s journey has come full circle and left an inspirational legacy for aspiring Hoosier scholars of the future.

Jim and Naomi arrived on the Bloomington campus in 1961, at a time when the university’s global connections and focus on international education were rapidly expanding under the leadership of Herman B Wells. As a burgeoning scholar of Russian history, culture, and politics, Jim was drawn to the Russian and Eastern European Institute, then recently founded by Robert Byrnes. For Naomi, however, the decision to study at IU Bloomington had more to do with necessity. Although she excelled as an undergraduate student in history, Naomi found that her advisors consistently discouraged her and other women from pursuing graduate studies and warned that few programs in the East would admit a woman.

In this time before Civil Rights Legislation was passed, “Many professors would say things like, ‘Women can’t go to graduate school, women shouldn’t go to graduate school,’” she noted. “So I went out to Indiana expecting perhaps that the treatment would be the same as it had been in college, which is to say not being treated equally and with respect. And just the opposite was true. From the time I arrived, the first person I met was Bob Byrnes, and he was very warm and welcoming. Then all the people I encountered in the history department in my classes, while working as a TA, and then ultimately my Ph.D. thesis advisor, Leo Solt—all of these people went out of their way to be supportive and helpful, and to treat me professionally.”

Naomi’s academic career would prove unconventional for the times in other ways. As the couple’s travels took them far from Bloomington, she continued pursuing her Ph.D. via correspondence. They married at Beck Chapel in 1963, and two years later they jumped at the opportunity to study abroad in Russia as part of a new program administered at IU.  Naomi and Jim would later spend time in London. After years spent sending her thesis back to Bloomington chapter-by-chapter for review, often waiting more than a month between responses, Naomi earned her doctorate in History in 1970. She traveled back to Bloomington to defend her thesis one day before they moved to Izmir, Turkey where Jim took up his first diplomatic assignment abroad after joining the U.S. Foreign Service.

While Jim’s career took their family several places around the globe, they returned frequently to Russia. On their first trip as students at Moscow State University in the mid 1960s, they found themselves immersed in an educational experience beyond any they could have hoped to find in a classroom.

As Jim noted, “There is no way of expressing the profoundly important difference it made to be in that place at that time if you wanted to have any real understanding about what the then Soviet Union was like.”

The Political and the Personal

They would return to Moscow for long stretches over the next four decades, often at times of significant upheaval and historic changes. As the first Foreign Service officer to have studied as an exchange scholar in the USSR, Jim would return to Moscow three times during his career of more than three decades. In 1991, as the Ambassador’s deputy he was in charge of the U.S. Embassy in Moscow when the failed coup attempt led to the downfall of the Soviet Union. He then served as the U.S. Ambassador to the Russian Federation from 1997 to 2001, a time that saw the transition from the administration of Boris Yeltsin to that of Vladimir Putin.

Naomi chronicled their experiences in her 2008 book, Through Dark Days and White Nights: Four Decades Observing a Changing Russia: Impressions and Reflections, to which Jim contributed an introduction and postscript. Although she is a trained historian, Naomi chose to write her book not through the lens of a professional historian, but rather through the more intimate lens of personal experience.

Naomi’s book is dedicated to the couple’s two sons and to “future generations whose ‘todays’ will be built on our ‘yesterdays.’” It is a fitting dedication that reflects the commitment Naomi and Jim share to ensuring that young scholars today have access to the kinds of opportunities that so profoundly shaped their careers and lives when they were young.

A Gift to Hoosier Scholars

In 2021 the Collinses expressed their gratitude to Indiana University with a generous gift to IU Libraries that included Jim’s personal papers from his diplomatic and subsequent career and Naomi’s professional papers from her work in the public humanities with organizations such as the Maryland Humanities Council and NAFSA: Association of International Educators, both of which she led as Executive Director. Their gift also included a significant portion of Jim’s personal library of Russian language books on Russian history, Soviet and Russian politics, Russian arts and Russian localities, and local history.

“The papers related to Collins’ experience as an ambassador and his foreign policy expertise are a wonderful addition to IU Libraries’ already very strong holdings in the areas of foreign policy and international relations,” said Sara Stefani, Modern Political Papers Archivist. “IU has a strong Department of History and of Political Science, a wide variety of renowned language programs, and an exceptional Summer Language Workshop and language flagship programs, not to mention the Hamilton Lugar School of Global and International Studies. Once the papers are processed, they will be of great use to researchers, faculty, and students in these programs.”

For Jim and Naomi, the decision to donate the records of their lives’ work to IU was an easy one. They wanted to give back to the university that had done so much to help them forge their own paths in life. As Jim put it, “For both of us, each in our own way, Indiana gave us unique opportunities that I don’t think we would have had in other places.”

“Ambassador Collins has played a tremendous role in our school as a founding member of our school’s Dean’s Advisory Council and as a mentor to our students,” said Nick Cullather, Interim Dean of the Hamilton Lugar School of Global and International Studies. “Ambassador Collins and Dr. Naomi Collins came to IU through Professor Robert Byrnes, the namesake of our school’s Russian and East European Institute. The Collins’ donation of their professional papers and library comes during a pivotal time in US-Russian history and will include the archival papers and State Department reports relating to Ambassador Collins’ diplomatic career. The entire IU student body, including Hamilton Lugar School students, will benefit from their venerable expertise.”

In October 2022, IU President Pamela Whitten recognized Jim’s continuing contributions to the university by awarding him the Distinguished Alumni Service Award, among the highest honors bestowed upon IU alumni. Jim has also been honored with a Bicentennial Medal, and Naomi has been honored with the President's Medal for Excellence.

The papers and other materials from the Collins collection will offer Hoosier scholars of today and tomorrow profound insights into the changing world of the late 20th Century, the transformative power of international experiences, and the ever-evolving importance of education in a globalized world. The couple hope the records of their professional achievements might have another benefit for young Hoosiers, as well. They want young people to realize that careers and lives are shaped by small opportunities and chance circumstances just as much as they are by well-intentioned plans.

As Naomi noted, “It’s easy to look at careers when they’re over and in retrospect think, ‘Oh, weren’t they lucky,’ or, ‘How did they get it to work out that way?’ without seeing how uncertainly or incrementally you get to that final place. When you look at history it seems as if there’s an intentionality in it, not just in personal history like ours, but in history in general. You can study history, and yet when you’re living through history in some dramatic changing event, as in the 1991 coup attempt in Moscow, you have no idea how that’s going to turn out. And the same is true in your personal life when you take that first job anywhere, you just don’t know where that’s going to go.”

Jim added, “The only thing certain is that it marks the first step on an unpredictable but exciting journey for which, like ours, Indiana has provided a rich variety of open doors.”

More About the Collins Papers

The archival papers of James Franklin Collins are approximately 71 linear feet including, but not restricted to, over 85,000 pages of archival papers and State Department reports relating to his diplomatic career in government with emphasis as Ambassador to Russia 1997-2001, post government consultation primarily relating to projects relating to the Russian Federation and Eurasia, board membership and projects relating to the Carnegie Endowment, educational material including thesis notes and drafts, articles and clippings, photographs, audio/visual tapes, correspondence, and miscellaneous ephemeral material.

The archival papers and related material belonging to Naomi Feldman Collins are approximately 11 linear feet in size containing over 12,500 pages of material relating to her PhD Dissertation, books and articles, and professional career.