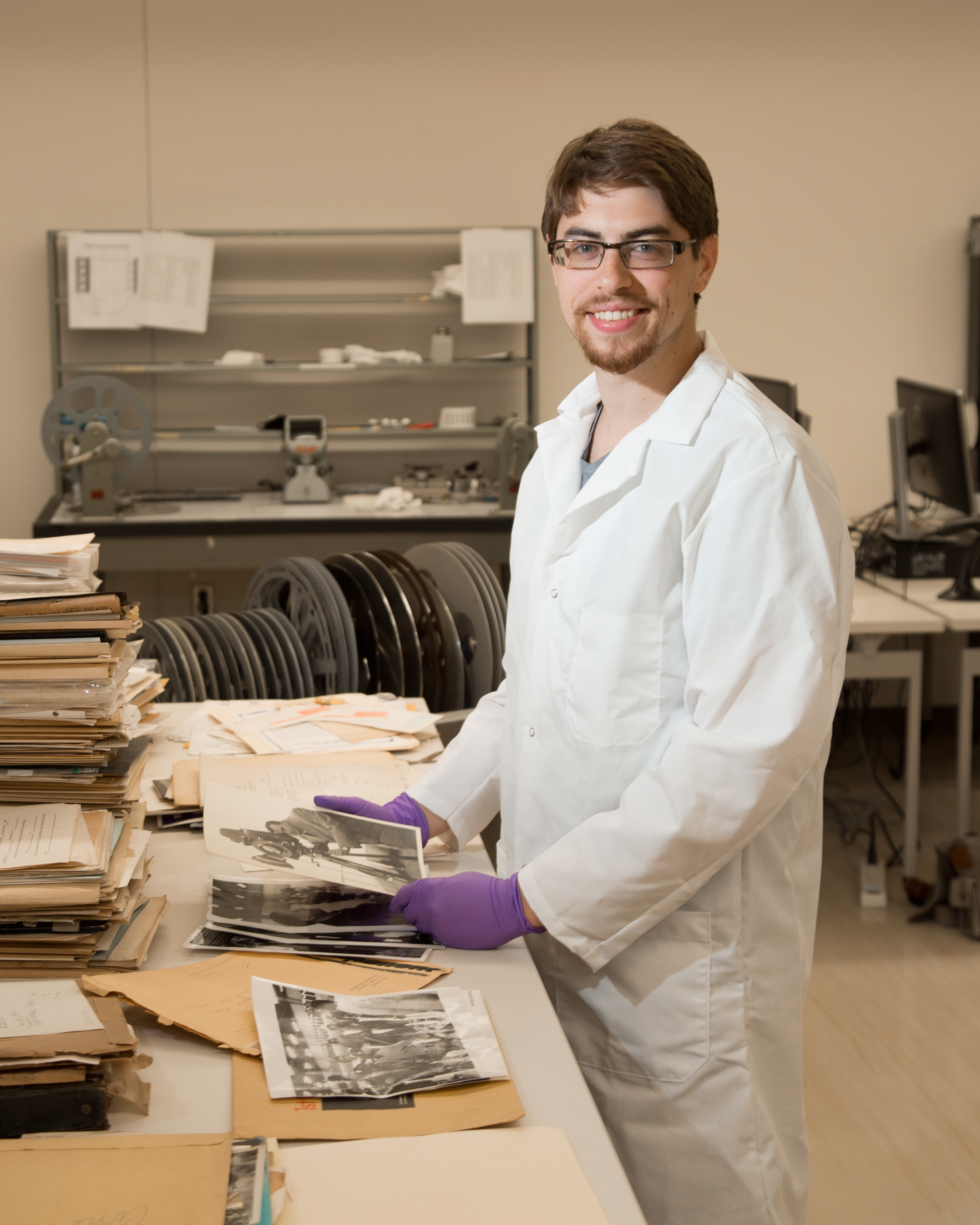 BLOOMINGTON, Ind. – Imagine the Ovoid Theater at the 1964 New York World’s Fair. Situated in the IBM pavilion, it floats dozens of feet over visitors’ heads. Inside, it is configured with 22 multi-sized screens where visitors experience “Think,” a landmark production by Ray and Charles Eames.

Now, more than 50 years later, a newly discovered home movie in the Edward and Naomi Feil Collection at IU Libraries’ Moving Image Archive is helping the Library of Congress bring "Think"  back to life. 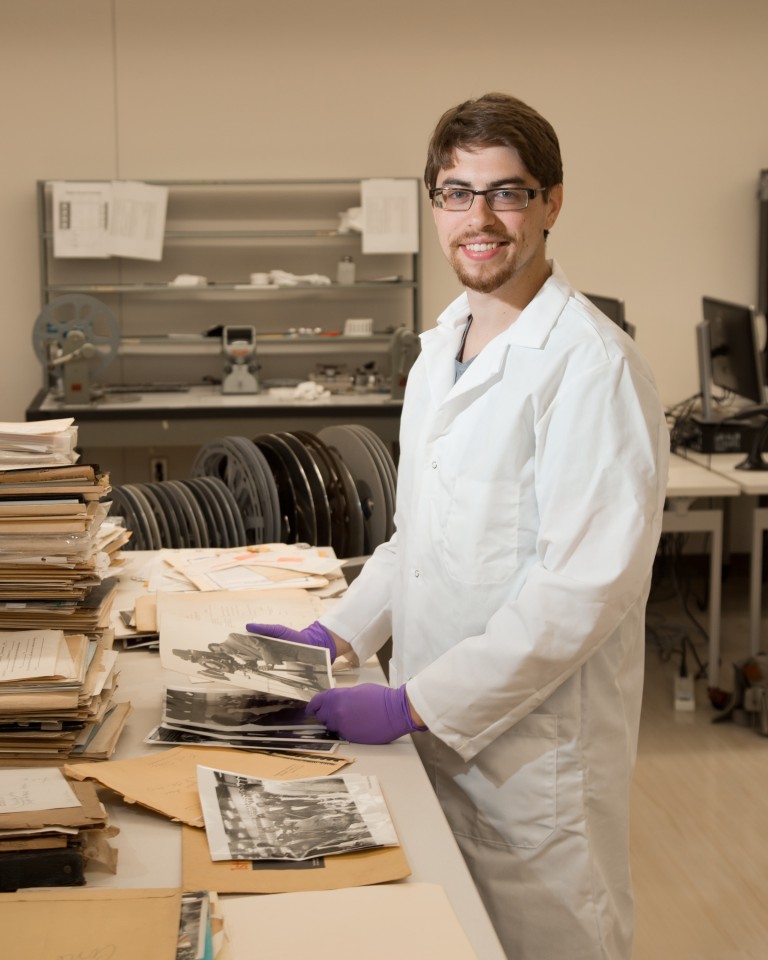 Robert Anen is a second-year graduate student in New York University’s Moving Image Archiving and Preservation (MIAP) program. With the support of a generous stipend from the National Endowment for the Humanities, he traveled halfway across the county to spend his 10-week internship processing the recently acquired Feil Collection for IU Libraries’ Moving Image Archive, and is pictured here inside the workroom processing the Feil collection.

The Feils, who gained prominence in 2015 when the Librarian of Congress named their 1968 docudrama “The Inner World of Aphasia” to the National Film Registry, created educational and promotional films from the 1940s through the 1990s. The Feil family donated its entire collection to IU Libraries earlier this year after Dan Streible, director of the NYU MIAP program, suggested it’s Moving Image Archive as an appropriate, permanent, archival home.

In addition to their industrial films, dozens of home movies in the collection document the Feils’ travels around the world, including Edward Feil’s 1940s military service, their 1956 trip to Afghanistan and South Asia, and a visit to the Montreal Expo in 1967.

The New York World’s Fair introduced computer technology to millions of visitors, particularly at the IBM Pavilion.  Rachael Stoeltje, director of IU Libraries’ Moving Image Archive, describes what these pavilion visitors might have experienced. “’Think’ was more than innovative, it was historic. It intermixed motion pictures and slide projections with a live emcee. The screens were different shapes and sizes. To get to it, visitors loaded into a tiered platform that raised them up to the theater 400 people at a time,” she said.

Anen knew that staff at the Library of Congress (home of the Eames Collection) were restoring “Think.” Archival reconstruction of such complex media requires documentation -- original plans, photographs, and film or video recordings -- to help conservators put the pieces together.

“The archivists had little in the way of accurate scripts or a complete visual record to verify their reconstruction of the original version of the film,” explains Stoeltje.

Amy Gallick is a Preservation Specialist at the Library of Congress working on the restoration. She said, “The Feil home movie was a great find.  We had completed restoration in 2015 so “Think” could be shown at the Barbican Museum in London as part of a larger exhibit, but had a few lingering questions.  We were in luck that Edward Feil filmed some of the sequences about which we were most uncertain.”

The reel of “NY Fair 1964-1965” spent some time  at the Library of Congress’ Packard Campus for Audio-Visual Conservation for study by the conservators, and came back home to Indiana in September.

A digitized version now streams online, thanks to the weeks of effort by staff and interns such as Anen.
Reflecting on his time with the Feil Collection Anen said, “Inventorying the films was a fascinating and moving experience for me, not only as a media archivist but as a human. I had the chance to examine the artistic process of a filmmaker whose passion for cinema burned so hot that even his home life seemed like a film set.”

Anen recorded his many discoveries in the collection, including details related to the “Think” recording, through blog posts for IU Libraries’ Moving Image Archive.

IU Libraries’ Moving Image Archive is one of the largest and most comprehensive film collections held by an American academic library, with more than 100,000 items spanning eight decades of film production. In 2012, the IU Libraries’ Moving Image Archive was invited to join the International Federation of Film Archives (FIAF), a collaborative association of the world’s leading institutions dedicated to the rescue, collection, preservation, and screening of moving images.