Experiential Learning at the Archives 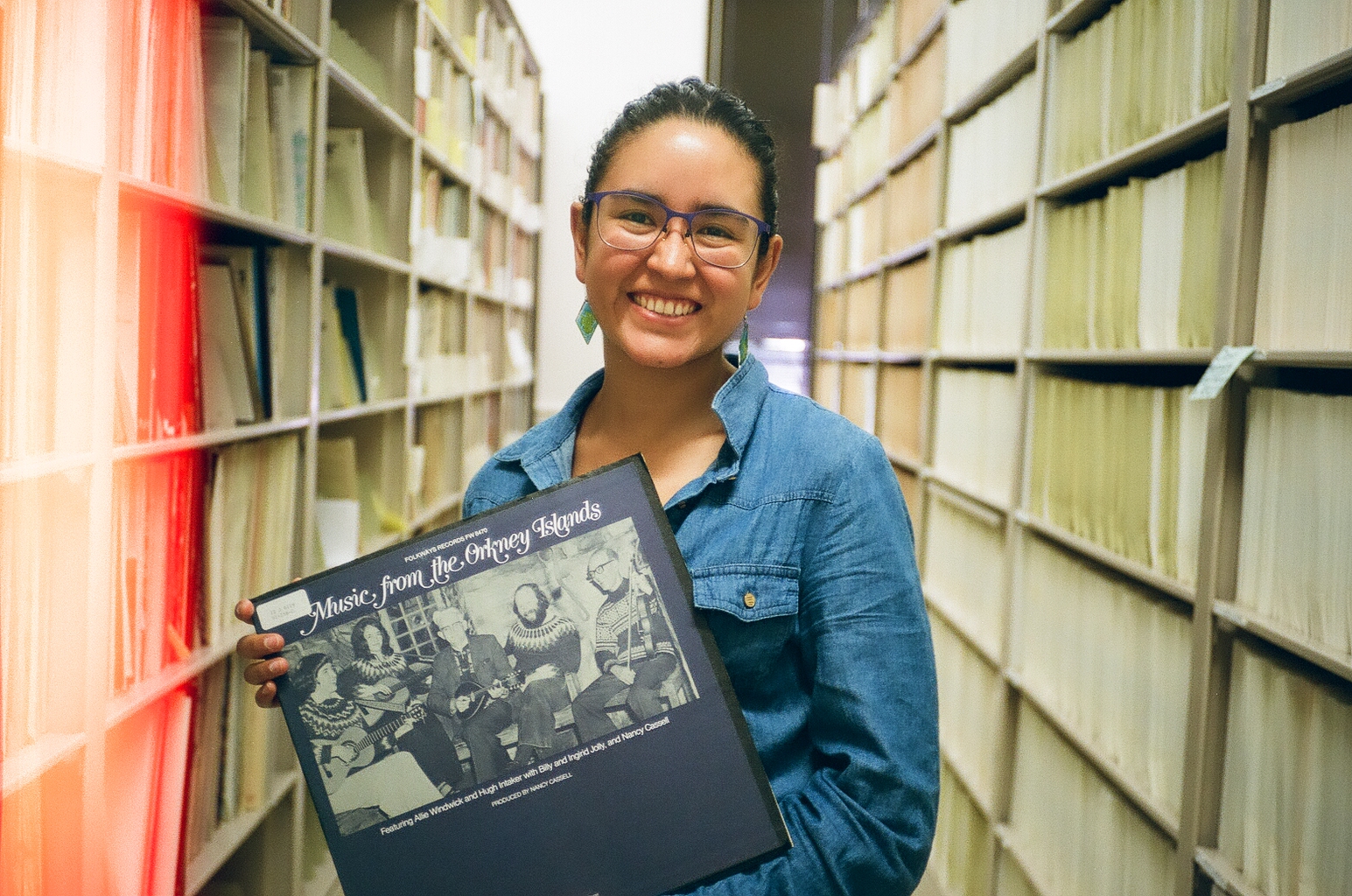 Amelia Lopez Lopez holds up the album "Music from the Orkney Islands" in the Archives of Traditional Music. Photo courtesy of  Xiaoshi Wei.

The word “ethnomusicology” intrigued Amelia Lopez  the first time she heard it. Finishing her undergraduate work in music performance in Colombia, her home country, Lopez came to visit the Bloomington campus. Because of her interest in studying ethnography and the Afro-Colombian violin traditions, she made the Archives of Traditional Music (ATM) a must-see spot during that tour. She says, “They are a pretty big deal in the field. I was so excited to be there. I couldn’t believe it! And one year later, I was working there,” she exclaims. “It was like a dream.”

Lopez is now a fourth-year Ph.D. student in Ethnomusicology in the Department of Folklore and Ethnomusicology. Before arriving at IU, as a violinist, she had already started researching Afro-Colombian violin music practices, focusing on racism and stereotyping. “As a violin player, I wondered if there were Afro-Colombian musical genres or styles that used the violin, which led me to my research.” Every summer she returns to Colombia, keeping her connections with this research alive.

The pandemic and the ATM itself changed Lopez’s research path. In her first semester, she was introduced to George List, Director of the Archives of Traditional Music from 1954-1976, by Alan Burdette, the current Director. List’s research interests included Colombia. Lopez describes List’s research at the ATM as “a big and rich collection, very important for Colombian music scholarship.” In one of her graduate seminars taught by Dr. Daniel Reed, she had to work with archival materials. “It was a challenge,” she says, “because I had never done it before. In the end, I loved it, because it was a fascinating topic. I looked at List’s mobilities: who financed his trips, how he moved around Colombia, and how did he contact his informants, etc. I asked questions like, ‘How did he get interested in going to Colombia?’ After these years of research, I have some hints, but no answer.”

She was hooked on George List for several reasons. Primarily, she feels it was a “duty” to get the information out to the public. “I’m very passionate about public work within academic public work, and List was a big enthusiast for public musicology. That’s why he was engaged in archives, but he also started a set of documentaries, and he had radio shows. I feel that richness is important to highlight. To me, it’s a model of how things have been done and how we spread our research knowledge to the world.”

Another reason is the fact List worked with sister and brother Delia Zapata Olivella and Manuel Zapata Olivella, two incredibly accomplished multi-talented Afro-Colombians important in the defense of the rights of black populations in Colombia. In addition to Delia’s and Manuel’s contributions, Lopez heard George List’s wife, Eve, on recordings, adding insights and asking questions. Lopez’s excitement about hearing others’ voices on the actual recordings is tangible; however, she points out that the work is published under List’s name exclusively. “Witnessing these things second hand is what made me want to pursue it as a dissertation topic.” Manuel, Delia, and Eve are only mentioned at the beginning of work under “Acknowledgments.”

Listening to the sound recordings gives Lopez much deeper insights. “The compliment of the written documentation with the sound is invaluable because with the sound you get some information that is not possible to be conveyed in the written form, frankly. You sense the friendships and the affective dimension of relationships in the field that you don’t get to read about in a book.”  Because of her access to the ATM, Lopez gets to witness part of history. It’s what inspires her.

Appreciation for the Archives of Traditional Music

“I feel the Archives have shaped my career,” Lopez says. “My whole trajectory changed.” Learning the processes for archival research expanded her view. The continuing support of the staff keeps her going. She credits Collections and Cataloging Librarian Allison McClanahan for always being there to help her, and the current director of the ATM, Alan Burdette, for his guidance and support in pursuing a digital humanities project.  Lopez loves getting to hear recordings and says that indexing a collection in a language you don’t speak is difficult, but is highly instructional regarding other cultures. “The Archive opened to me a whole world, a different world.”

Lopez suggests new students come to the Archive with an open mind. “Dig into the Archives. Go there. Go explore out of curiosity. You’ll never know what you will find.”

Music and Poetry in the Colombian Village: A Tri-Cultural Heritage

Lopez decided to research List’s work in Colombia for her dissertation. To narrow down the broad topic, she is using the time period of List’s book Music and Poetry in the Colombian Village: A Tri-Cultural Heritage.

Lopez is looking at how Manuel and Delia collaborated with List. Because they were List’s interpreters in the field, their contributions are audible on the recordings. “I’m looking at how their interpretations also shaped his view of the music. It’s a lot of mediation.”

Besides exploring those connections around the book’s conception and writing (1964-1965), Lopez is researching its journey to publishing and finally its translation into Spanish. List returned to IU in 1965, but the book wasn’t published in English until 1985. “Much of the data was out of date, and there are some issues with that,” Lopez explains. But then, the translation took another 10 years and wasn’t published until 1995.

“I am trying to look more into the human aspects as well,” she explains. “It’s easy to detach the human when you’re looking at the object, the publication.” She expresses the strong connection between List and the Zapata Olivellas: “Their work was all going toward the same end, which was to make visible Afro-Colombia in Colombia. Afro-Colombian and indigenous communities weren’t legally recognized in the country until the 1990s.”

“People tend to believe that in Colombia, because we’re a multicultural nation, we’re not racist. This is a US problem where the Black and White divide is so strong, but looking at these connections helped me say, ‘No.’”  She says her work is important to the conversation. “I hope to push back on these assumptions. We share the history of colonization even though it has developed in different ways. It’s a global problem and racism is alive everywhere.”

She says it will take her time and jokes, “George List took twenty years to write a book. How many years will it take me to develop this webpage?”

Lopez is also a Humanities, Arts, Science, and Technology Alliance (HASTAC) scholar through the  Institute for Digital Arts and Humanities. Her project is a digital exhibition that compliments her dissertation. She will invite Colombian researchers and institutions to continue collaborating on matters of Colombian music, heritage, and civil rights. Lopez’s goal is to launch an introductory amount of content by the end of the Spring 2022 semester.