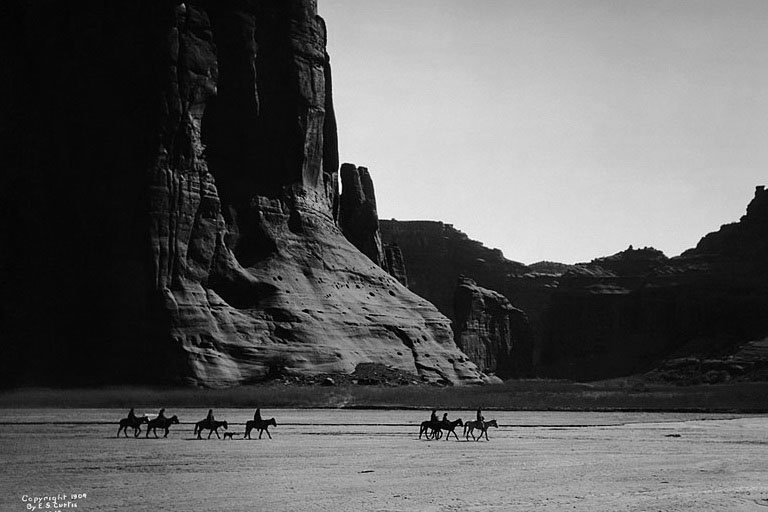 Edward Sheriff Curtis was born in a rural community outside of Whitewater, Wisconsin, on February 16, 1868. His career in photography began when he dropped out of the sixth grade and built his own camera. By 1885, he was an apprentice photographer in St. Paul, Minnesota. The Curtis family moved to Seattle, Washington, soon thereafter where Edward Curtis’s career in photography took off after meeting and photographing Princess Angeline, which became his first Native American portrait. Over the next 15 years, Curtis’s relationship with an expert of Native American Studies, George Bird Grinnell, enabled him to be the Official Photographer for the Harriman Alaska Expedition. He accompanied Grinnell on an expedition through Montana to photograph the Blackfoot Confederacy. The photography from these expeditions caught the eye of J.P. Morgan, who offered Curtis $75,000 to create a twenty-volume work, including 1,500 pictures, on Native Americans. His work, The North American Indian, and a feature length, ethnographic, silent film, In the Land of the Head Hunters, which featured members of the Kwakiutl [Kwakwaka’wakw] people of the Pacific Northwest, were not enough to financially support himself or his family. This economic hardship resulted in Curtis selling the rights to The North American Indian to J.P. Morgan Jr. in 1928, before publishing the final volume in 1930.

The ATM holds 279 cylinders (57-014-F) made by the ethnologist and photographer Edward S. Curtis from 1907-1913 as he traveled through British Columbia, Washington, Idaho, Montana, Wyoming, New Mexico, and South Dakota, working on his 20-volume magnum opus, The North American Indian. While it is commonly stated that Curtis made 10,000 cylinder recordings between 1900 and 1930, this number is not substantiated. In any case, these are the only Curtis cylinders known to survive or be institutionally available. While Curtis is now mostly known for his stunning portrait photographs, he thought of his work as documentary and ethnographic.