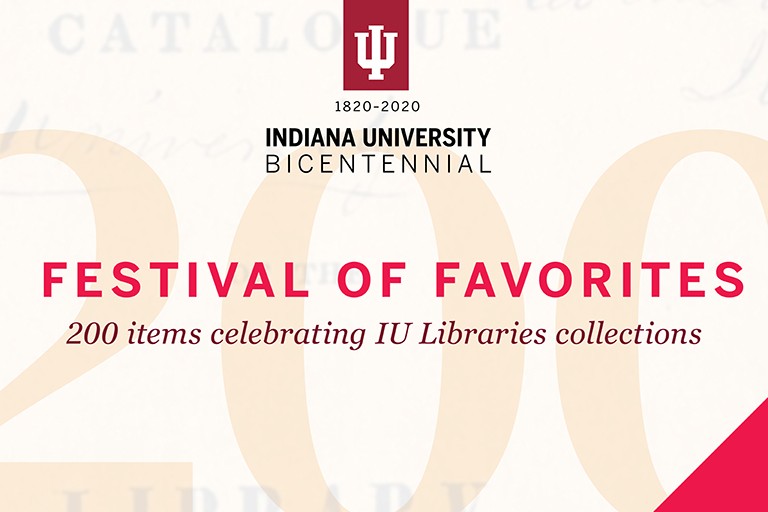 A favorite of Dennis Groth, Vice Provost for Undergraduate Education at Indiana University, "As We May Think" was written by Vannevar Bush and published in the July 1945 issue of The Atlantic.

The items selected for our Festival of Favorites span many centuries and represent works from across the globe. Dozens of librarians and archivists from the IU Libraries handpicked these materials, which represent myriad disciplines. Faculty at Indiana University were invited to suggest their own favorites.

Some of these items are exceedingly rare, some have profound cultural or historical influence, and some are just plain fascinating, if not downright peculiar. They exemplify the vast collecting breadth of the Libraries and the ways in which the Libraries' collections act as both an important cultural institution and as a tremendous resource that expands scholarship and public knowledge in innumerable areas.

In July 1945, Vannevar Bush published an article in The Atlantic in which he describes the idea of the “Memex device.”

The device he envisioned would be able to store all of his books, papers, and communications in one single machine using the equivalent of microfilm.  In the decade that preceded, Bush had been thinking about the value of storing, re-organizing, and drawing upon a collection of related information.  He recognized the power of storing information that could be pulled together in different combinations. He is credited with conceiving of the idea of the internet and hypertext. The visionary article was inspired by the importance and demand for industrial and scientific information.

As Bush had imagined, the internet is the most common means of communicating research findings, data, and other forms of scholarly information. It is interesting to ponder Bush’s response if he could see the real-world version of the imagined; “Memex” is also the conduit which delivers many images of the “cutified” faces of people using Snapchat filters. Regardless of the enjoyment the internet delivers, the power of communicating ideas quickly and easily has significantly altered the way students and researchers learn and discover new ideas.  It has made our world today much more complex and also richer. It is hard to imagine a life without it. In just seven pages in The Atlantic, Bush set about to change the course of communication and history.

This item is a favorite of Dennis Groth

Dennis Groth is the Vice Provost for Undergraduate Education at Indiana University Bloomington.