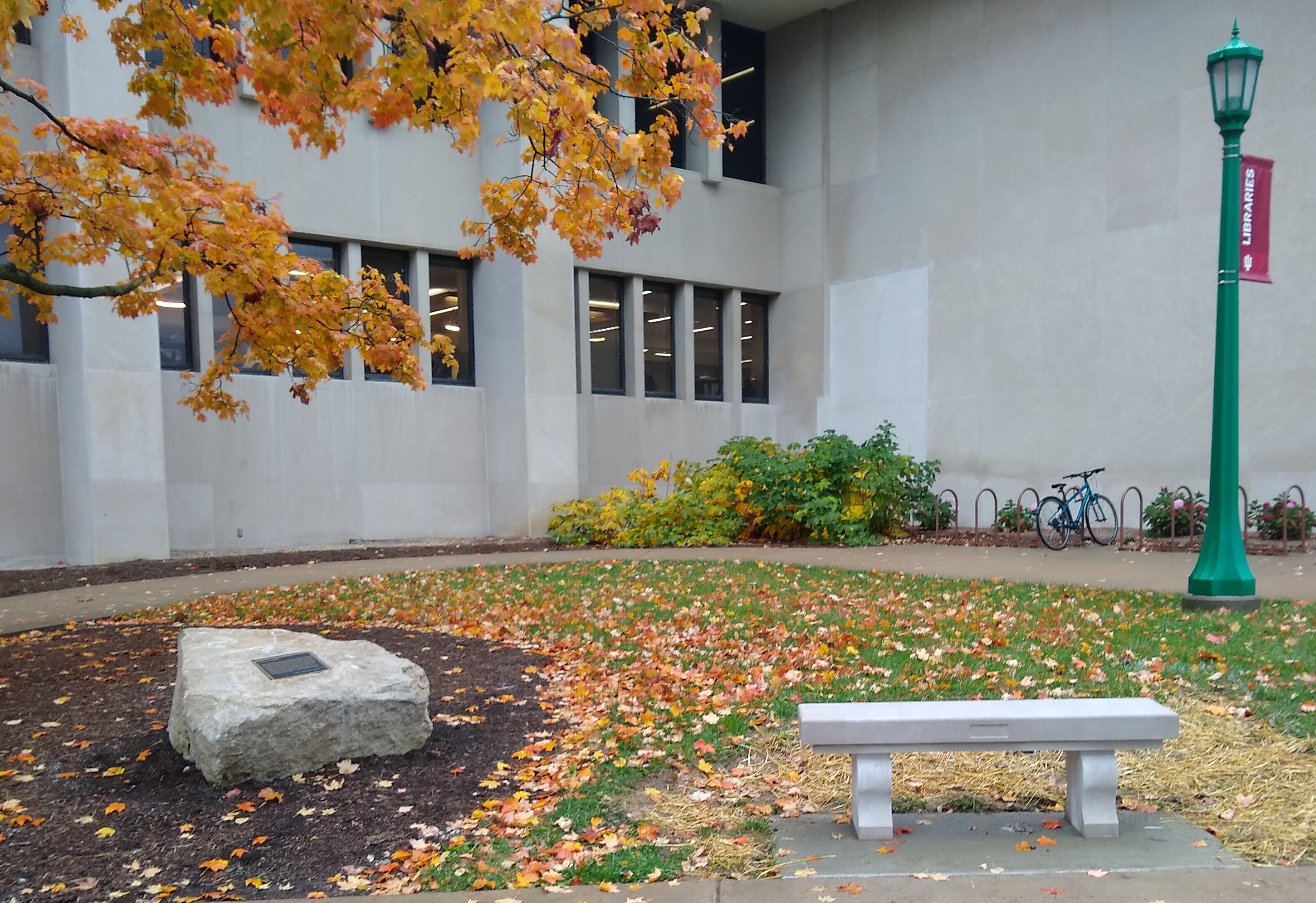 “Archives are not only there for anniversaries and celebratory occasions.”
- University Archives Director Dina Kellams

Underneath a maple tree on the southwest side of the Herman B Wells Library facing the Hamilton Lugar School of Global and International Studies sit a boulder and a bench. Dedicated to the Japanese American students denied access to Indiana University during World War II, the reflective spot represents the cumulative work of alumnus Eric Langowski. His hard work and determination revealed that William Suyemoto, Robert Omata, Sumiko Itoi, Richard H. Iwata, Tadashi Ochiai, Richard Doi, and Donald Yamashiro, along with at least five additional unnamed applicants, were denied admittance to Indiana University between 1942 and 1945.

This seat of acknowledgment for what was done wrong is appropriately placed next to the home of IU Libraries' University Archives, where Langowski found help in his search for justice.

“Archives are not only there for anniversaries and celebratory occasions.” Director Dina Kellams explains, “One of the main reasons we exist is accountability, and making sure institutions are accountable for their actions. Working with Eric to access to these records shows that Indiana University is open to that sort of scrutiny.”

Even though he had no archival experience, Eric Langowski had a point to make when he started his relationship with the Indiana University Archives. He was determined to hold IU accountable for banning Japanese American students during World War II. In a 2017 op-ed to the Indiana Daily Student, Langowski shared:

My grandmother was forced to withdraw from her college. She was arrested and placed under armed guard at the Santa Anita horse racetrack where she was lucky to not be assigned a horse stable for a three month confinement (many others weren’t so lucky).

Kellams says of Langowski, “He wasn’t doing this for a class project. He had a bigger reason for doing this work.”

During most of his undergraduate tenure, Langowski worked for the Asian Cultural Center (ACC). In 2017, he helped organized a panel on the topic of Japanese American internment on the Day of Remembrance. It was the 75th anniversary of Executive Order 9066, Roosevelt’s decree to incarcerate Japanese Americans. Along with associate professor Ellen Wu, Langowski started a petition, asking for a formal apology from IU, honorary degrees for those affected, and programming for education.

Also in the immediate years leading up to the Bicentennial, the ACC was looking for the first Asian American IU student. Two items came to the attention of Director Melanie Castillo-Cullather and Langowski: a 2016 University Archives’ blog by Katie Martin and an IU Bicentennial podcast by intern Ellen Glover entitled “The Effects of Pearl Harbor at IU.” Both of these items led Langowski to the University Archives, located on the fourth floor of Wells Library.

“Both focused on what was in the Archives, but not on what it meant, or what could be done with the information.” Langowski wanted to find out more. Questions ignited his interest. “I was trying to figure out the names of those denied admission,” he says. “I wanted to know what happened after IU did this (the ban). How long did it last? Who did it affect?” Langowski was determined to put personal faces on the facts.

He was hired as an intern at the Office of the Bicentennial in 2018, tasked with exploring the history of Asian Americans at IU. The award-winning paper that resulted, Education Denied: Indiana University's Japanese American Ban, 1942 to 1945, required research and details. 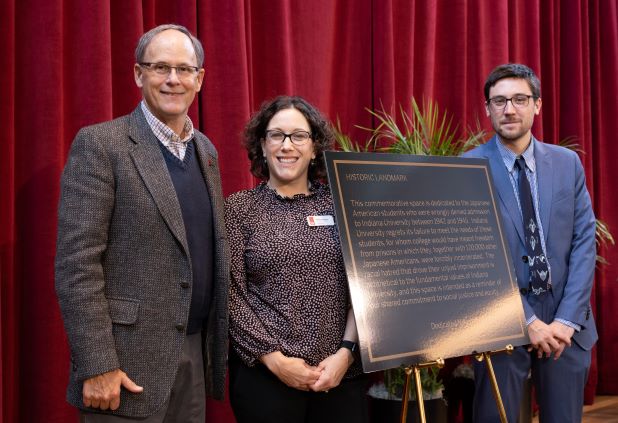 Working with the Archives

Working with Director Kellams, Langowski read what was available digitally, and then would ask her for the next item he was looking for. By the time he became a Bicentennial intern, Langowski was working with James Capshew, IU historian, and then Bicentennial Archivist Kristin Browning Leaman.

When Langowski first reached out, “He was really interested in doing research on applicants that had been denied entry into Indiana University during WWII due to their being of Japanese descent,” Kellams remembered. He wanted to know if they had ever been given a formal apology. Several years prior to Langowski’s interest, students at the Archives worked on digitizing the Board of Trustees’ Minutes. The students discovered the minutes where the Trustees discussed denying Japanese American students admittance. Kellams says, “It was the very first time I had heard of anything about the ban.”

A lot of what Langowski needed was already digitized. However, he noticed a lot of cross-referencing, so Kellams helped him find those items. “We worked to give him access to these records,” Kellams clarified. “They were part of the university history. He was one of the first researchers that I was aware of that really dug into it. We were so impressed with Eric.”

Of all the documents he looked at, Langowski was most perplexed by the transcript of Trustee Ora Wildermuth’s own racist words. Compared to the other transcripts of minutes, this one stood out for its detail. “This random document that shows a lot about what the Trustees were thinking,” Langowski points out. These “damning words that Wildermuth said were the words President McRobbie used to argue removing his name” from the intramural center named after him. “That’s a powerful document.”

No one ever talked about the ban, or acknowledged it, but the xenophobic words are there for all researchers to see.  From May 9, 1942 to September 20, 1945, IU officials, including Herman B Wells, obfuscated the truth, used indirect language, and blamed other organizations to justify not allowing Japanese-American students to attend the university. “No one ever talked about this ban,” Langowski says.

Kellams explains that the Archives “have a very large collection with a lot of breadth and depth in what can be found in there. A lot of times, we don’t even know what we’re going to find.” Her predecessors decided that they would keep personal papers from faculty, staff, and students. “Not all college and university archives are in a position to do that,” she points out. Langowski, who now has worked with several archives, notes the same: “The IU Archives are so supportive and open to student work. There is not an institutional investment in what the IU narrative is. It is not exclusionary.” He feels they helped him when he didn’t even know what he was looking for.

Describing their work, Kellams elucidates: “We work with the university’s offices, departments, institutes, and centers to help them identify records with long-term historical, legal, evidential, or research value.” She shares that student organizations have reached out to explore the history of their groups. The Archives reach out mostly through social media and class contact. “Outreach and Public Services Archivist Carrie Schwier has done a tremendous amount of work to establish relationships with instructors and bring their classes to the Archives.” Those classroom visits often result in interested students coming back. “When we are in front of the students, we try to ensure that they know we are there for them.”

“Archives and Special Collections can feel intimidating, especially to undergraduates. They may feel like they don’t belong, but they do,” Kellams emphasizes. “We want them to come in and use our collections.” The Archives shares pictures of their collections on social media and their blog. It is common to see several photos of past students lounging around in familiar settings on their Twitter account. Students working in the Archives often share what they find in Blogging Hoosier History.

Every semester there are always some students who are enthusiastic about their research. “They really enjoy working with primary sources,” Kellams explains. Langowski was one of those students. The Archives supported him. They had a role to play in helping a wrong be addressed. With a smile, Kellams says, “I am so thrilled that he was successful in getting the university to issue that apology and to dedicate a memorial to the students who were denied access.”