Snapshot of the 2007 Presidential Campaign in Senegal

The 2007 Senegalese Presidential election was held on February 25th after just three weeks of campaigning. Fifteen candidates ran for the seat, but the incumbent, Abdoulaye Wade, won in the first round with 56% of the 3.4 million votes cast. The most important issues of the election were: high unemployment, economic growth not trickling to the lower classes, and corruption. There were many complaints of voter fraud, but despite several appeals from prominent politicians, the highest court certified the results. 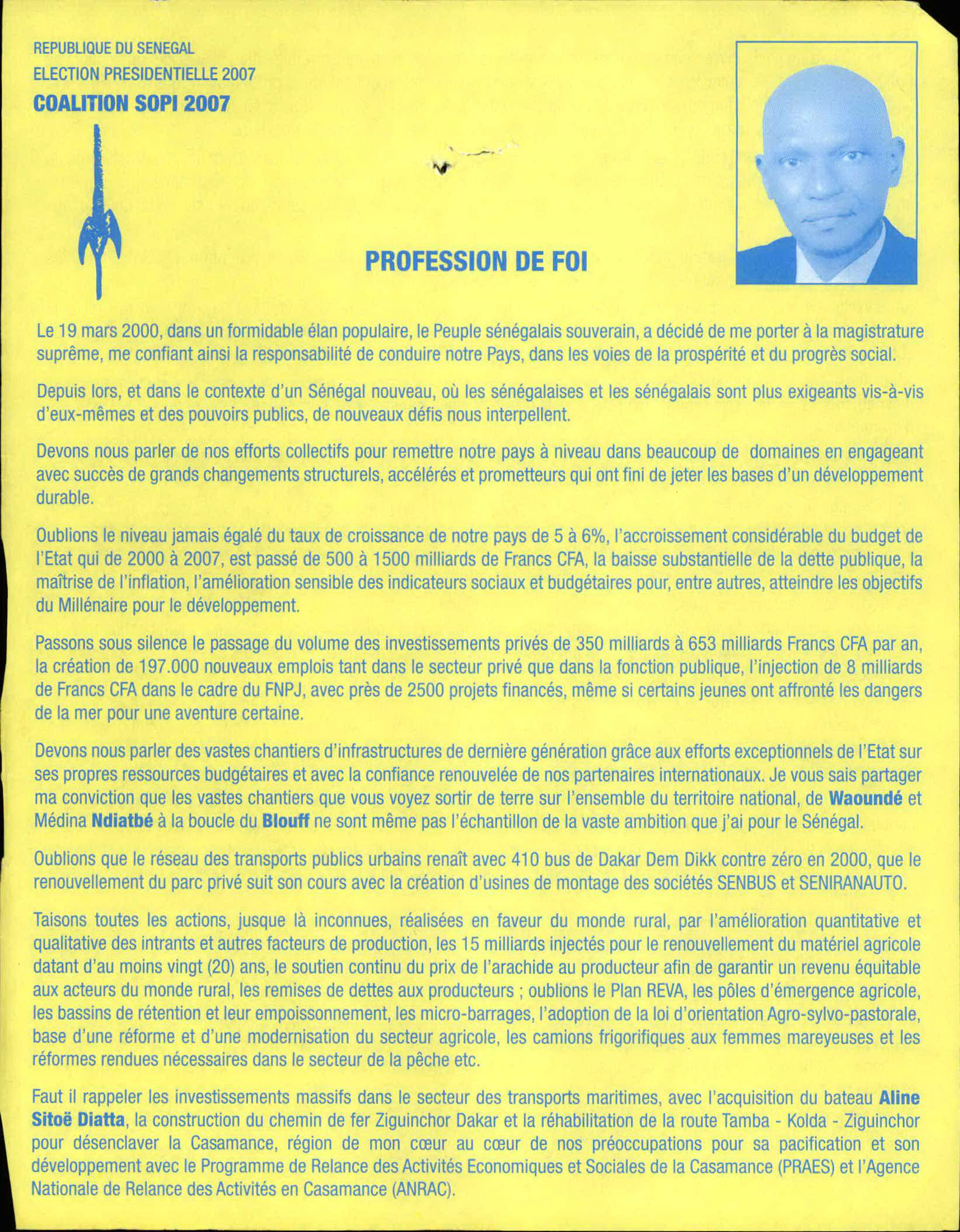 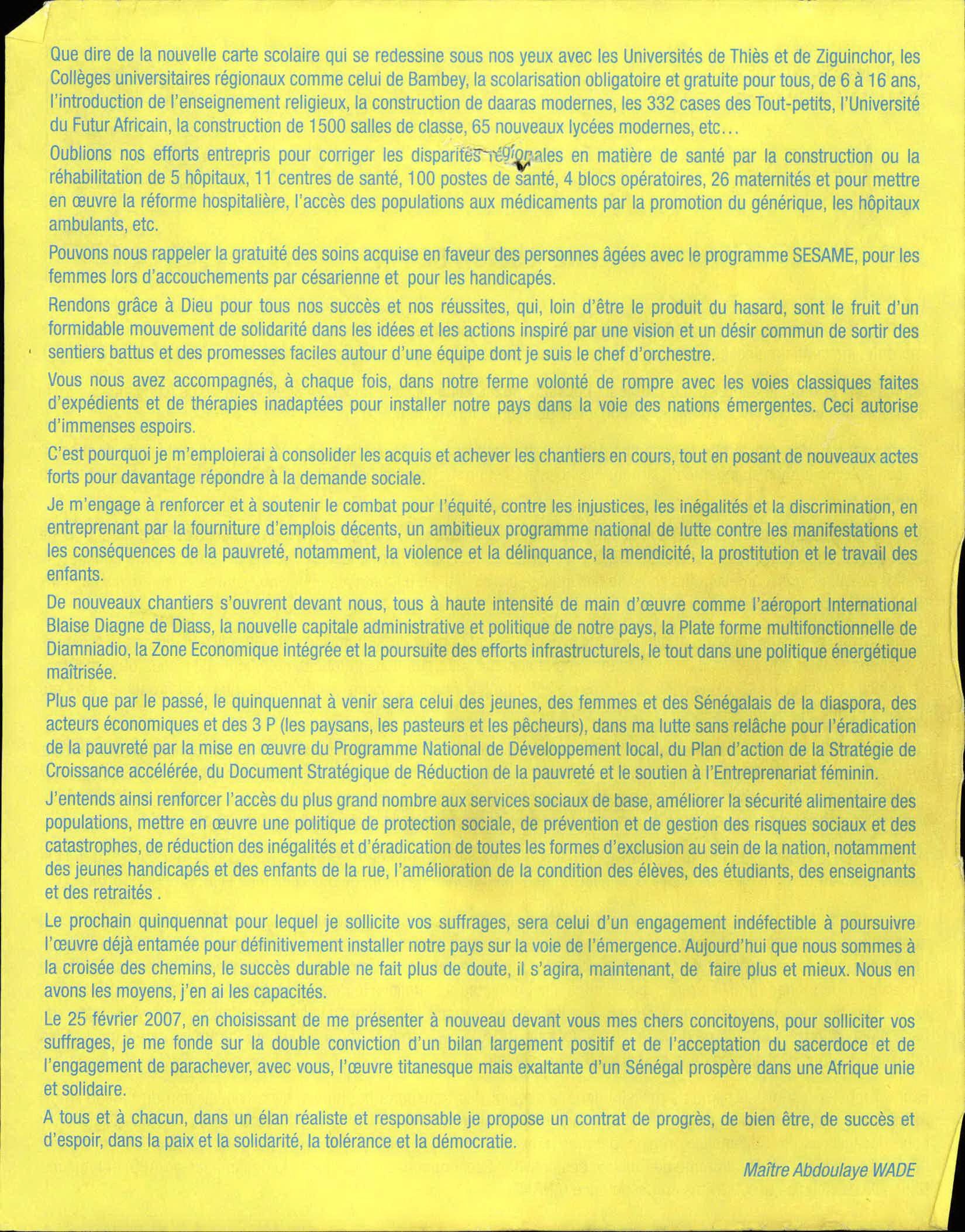 (Right click on images to see them full sized)

Aboulaye Wade holds doctorates in both law and economics and has been involved in Senegalese politics since 1974.  That year, Wade asked President Léopold Sédar Senghor permission to start a new political party, and Senghor agreed.  Wade founded the Senegalese Democratic Party and has been the Secretary General of the party ever since.

When President Senghor announced his resignation in 1981, Wade objected to Senghor’s protégé,  Abdou Diouf, automatically assuming the presidency, and instead, called for the military to oversee a new election. Wade’s call went unheeded and in 1981, Diouf became president. Wade ran against Diouf in 1983 and 1988, but lost both times. Finally, in 2000, Wade beat Diouf in the first round of the election, and Diouf stepped down.

In the 2007 election, Wade won with 58% of the vote in the first round. The main opposition parties disputed the results and then boycotted the National Assembly elections that followed. Wade lost his bid for a third term in 2012, and stepped down peacefully, though he remains the Secretary General of the Senegalese Democratic Party. 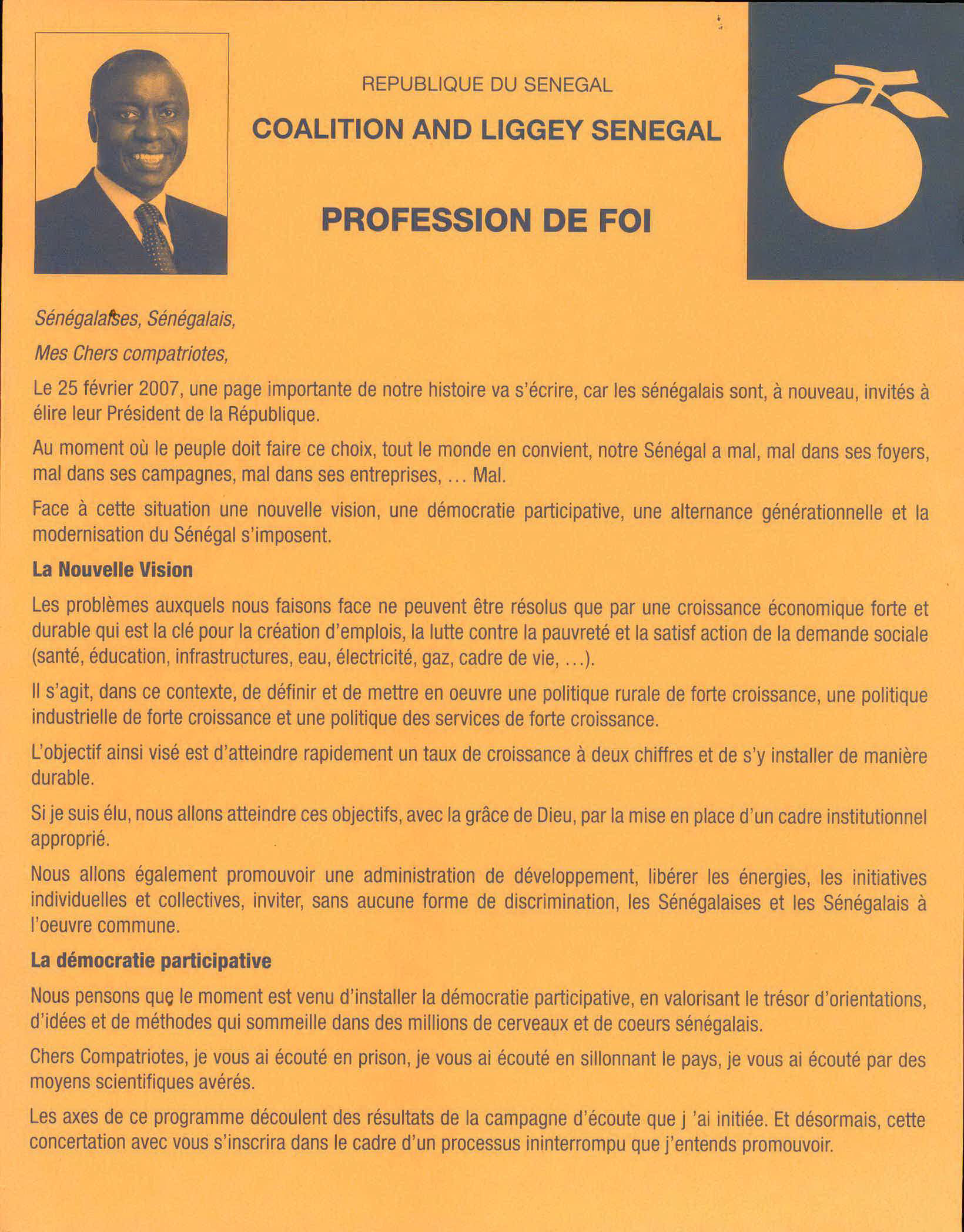 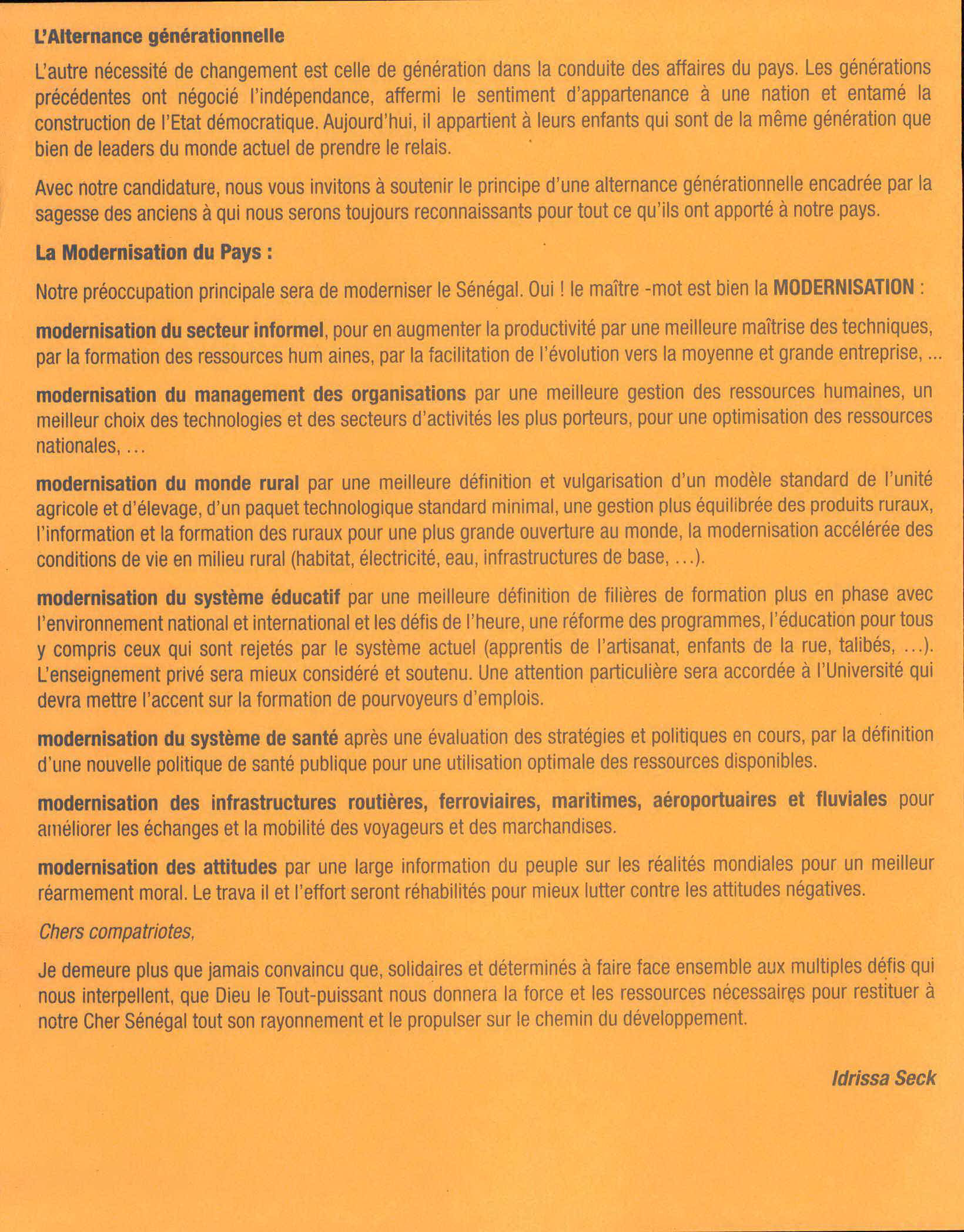 Seck was Wade’s former Prime Minister and was once considered Wade’s protégé until he was dismissed in 2004. Subsequently, Seck was jailed on charges of corruption and charged with threatening state security in 2005. He never went to trial,  all charges were eventually dismissed, and he was released from prison.  Seck formed a new political party, Remwi (Wolof for “The Country”) and received 15% of the vote.

Dieng’s public service career began in 1978 when he was appointed Diplomatic Advisor by President Senghor. In 2007 he ran on a platform of good governance, independence of the judiciary, and changing the political seat of power to the National Assembly. Dieng appealed the election results, but his appeal was rejected. After the election, Wade accused Dieng of corruption for illegally selling fishing licenses in 1992. 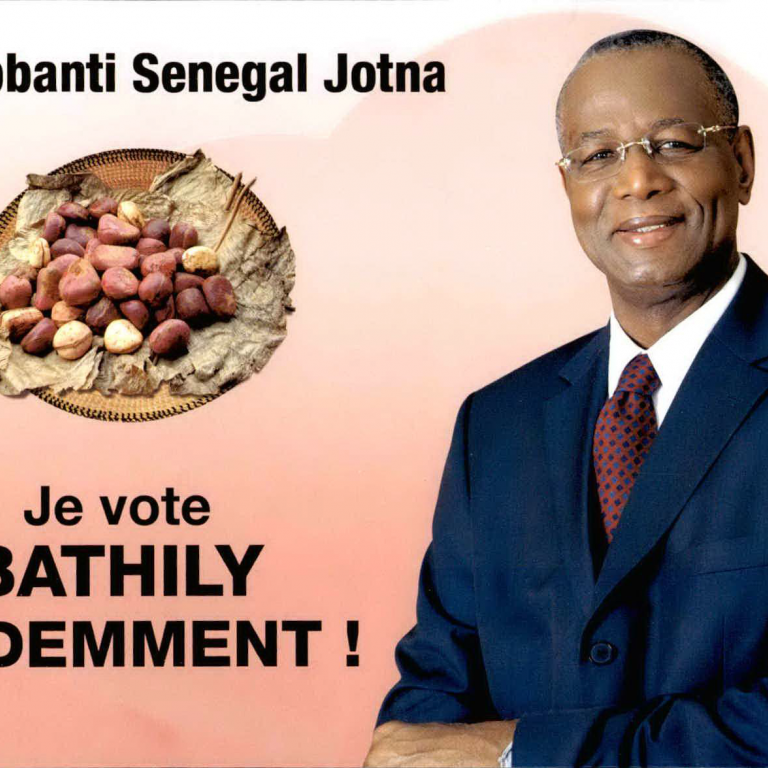 Bathily is a former National Assembly member, and was the Minister for the Environment and the Protection of Nature. He backed Wade his 2000 presidential bid. Bathily eventually broke with Wade and led a vote in the National Assembly against amnesty for those implicated in the 1993 killing of the Constitutional Cabinet Vice President -a crime that Wade, among other men, was questioned for. As a result of this, Wade dismissed Bathily and other ministers who supported the vote.  Along with Osmane Tanor Dieng, Bathiliy contested the 2007 election result. 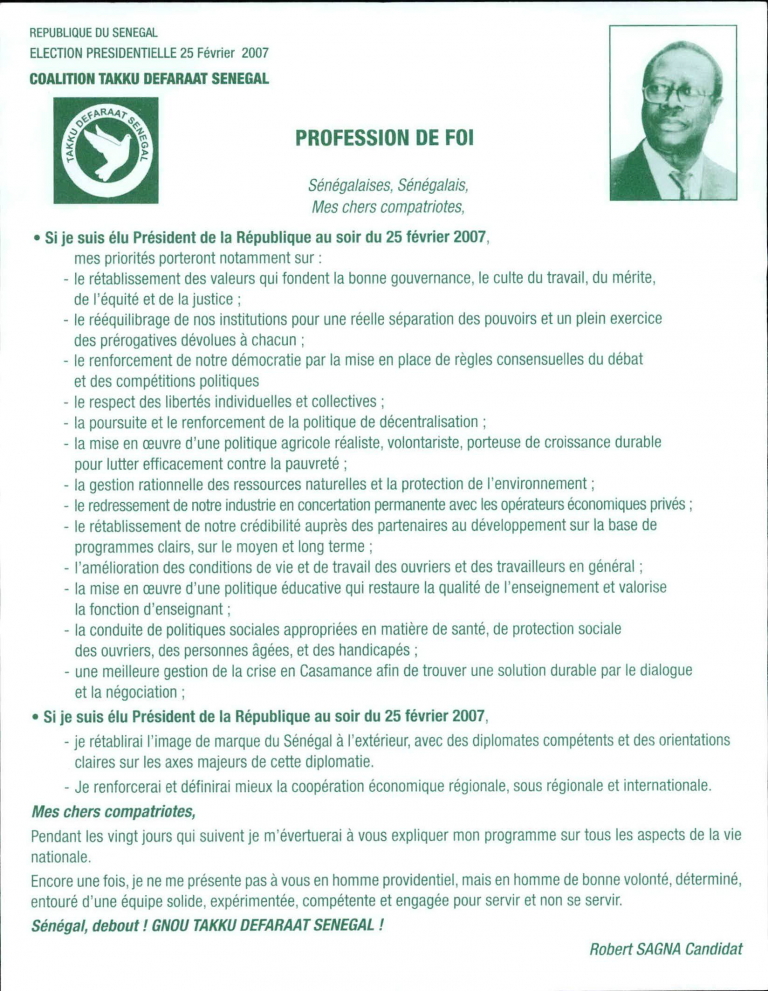 Sagna was part of the “Democracy and Solidarity” movement within the Socialist Party that opposed Dieng’s candidacy in the 2007 election. Sagna did not appeal the election results. 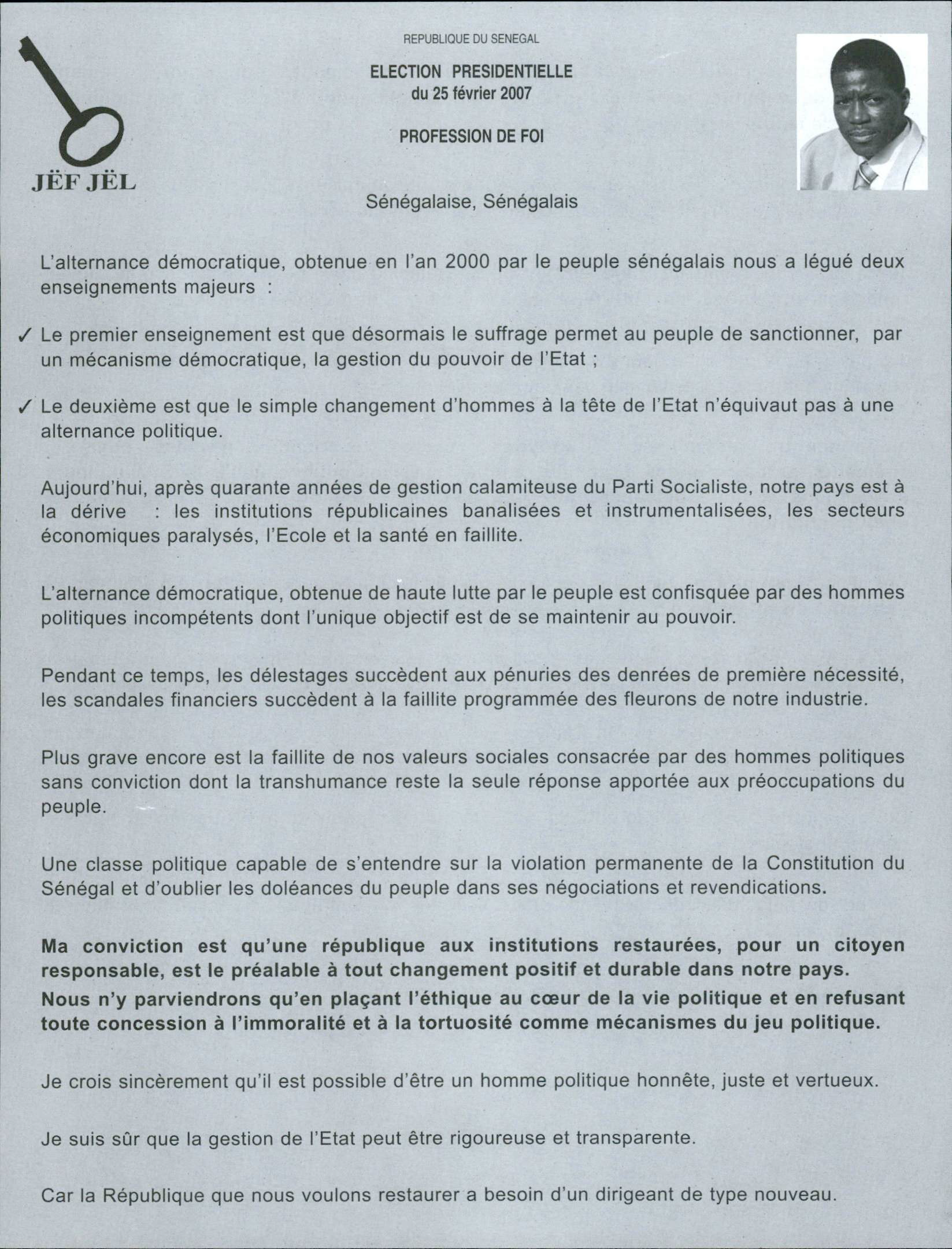 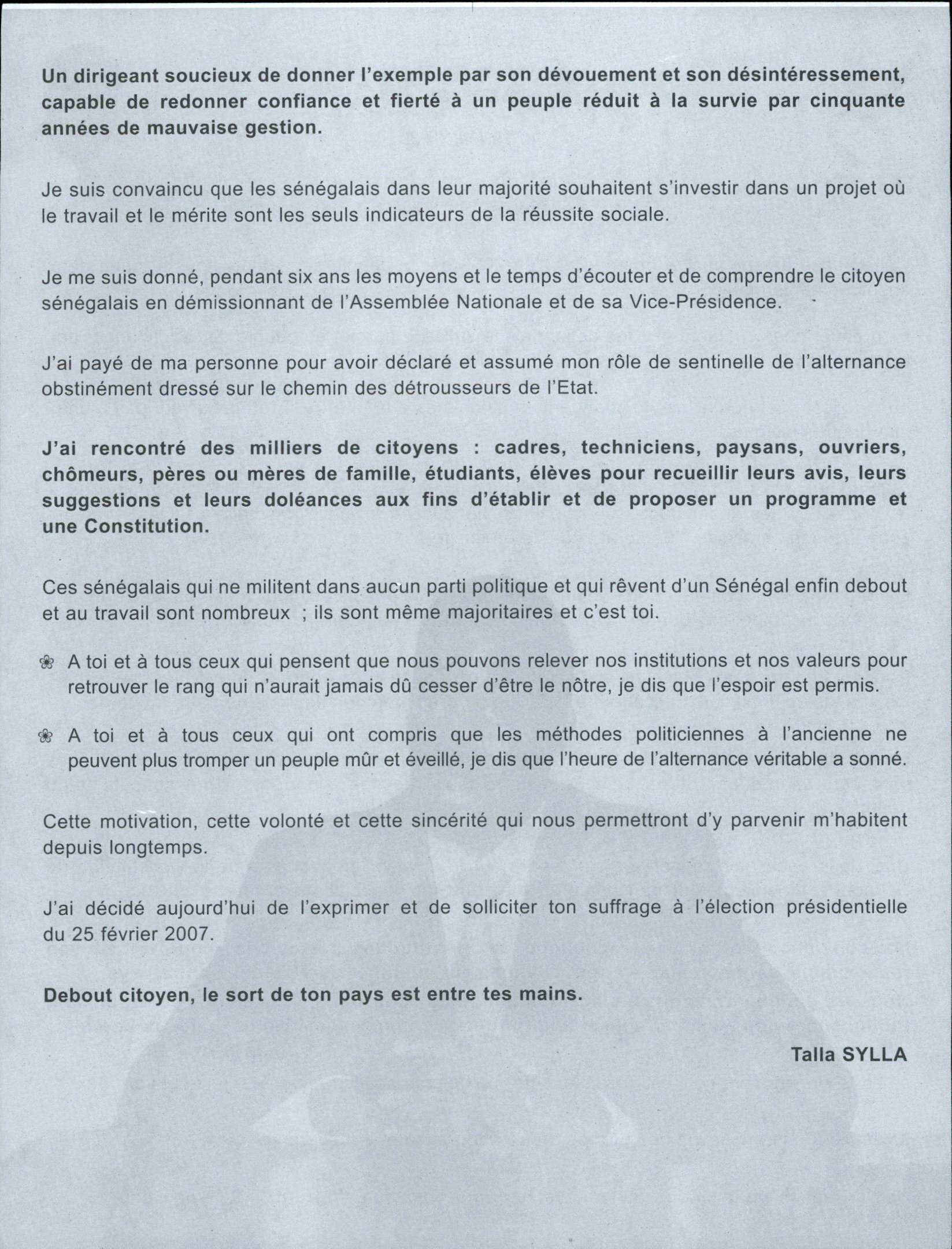 Talla Sylla lost the presidential election but returned to the National Assembly. 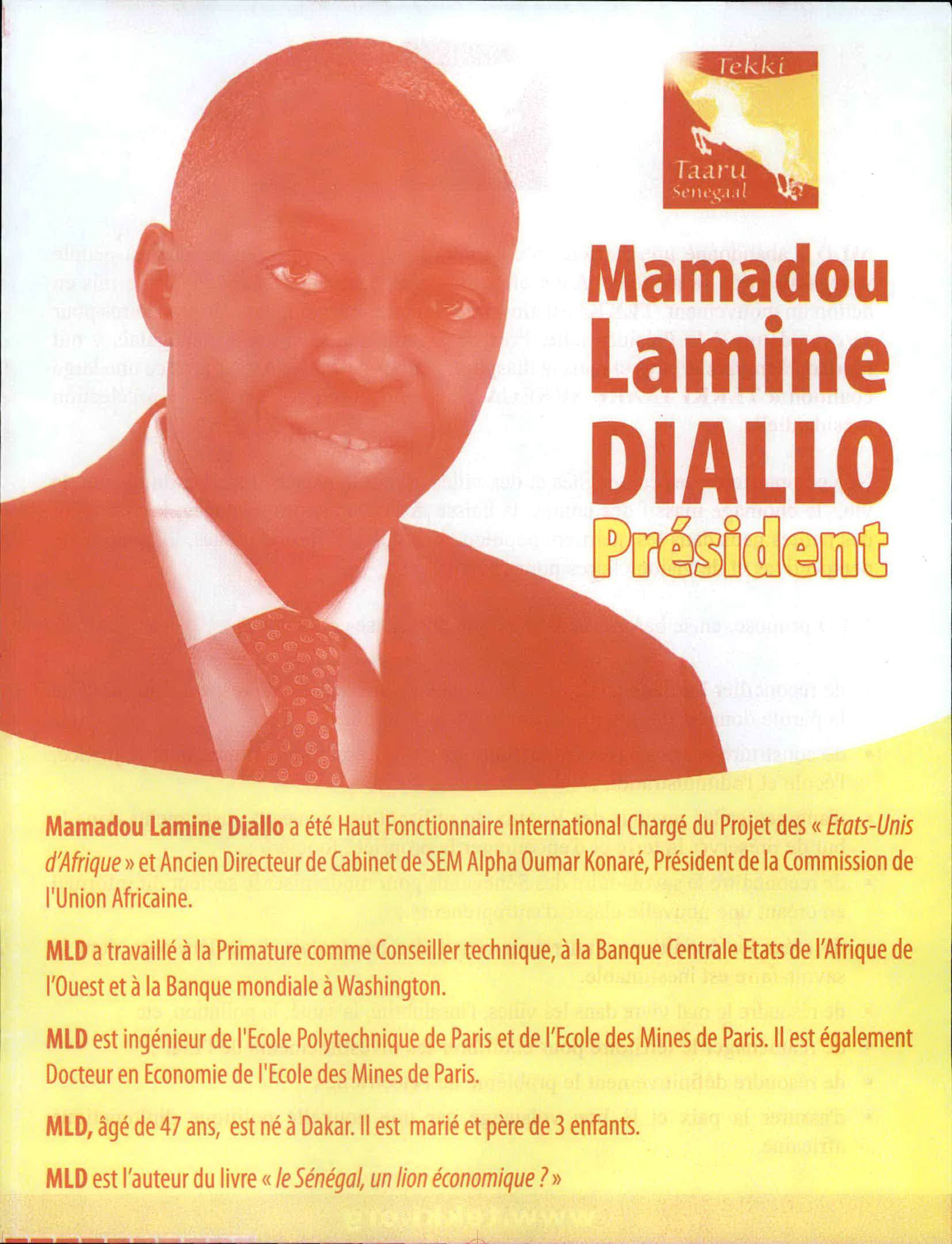 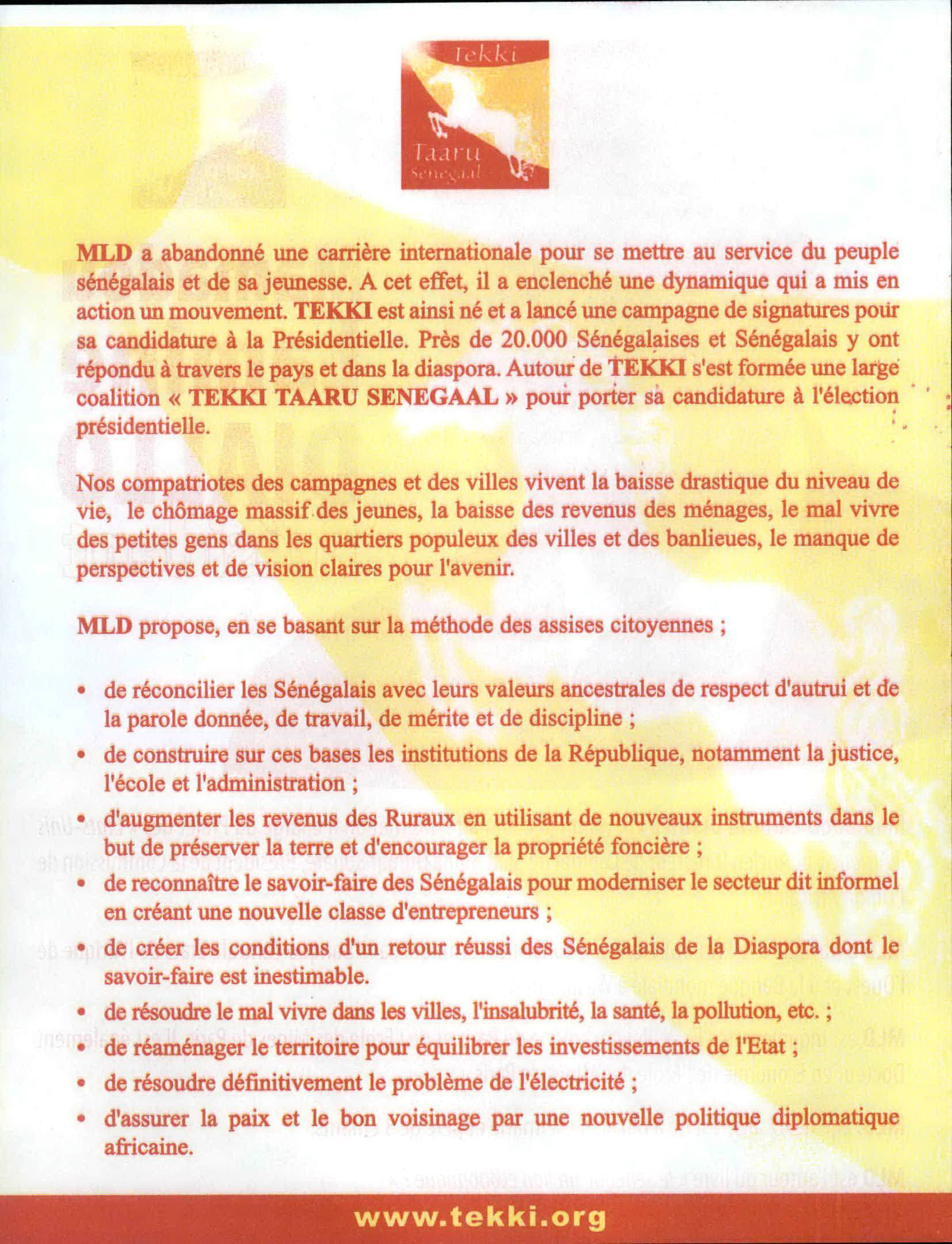 Diallo is the founder of the Tekki ("success" in Wolof) Movement, political party.

Books about Senegelese Politics at IU