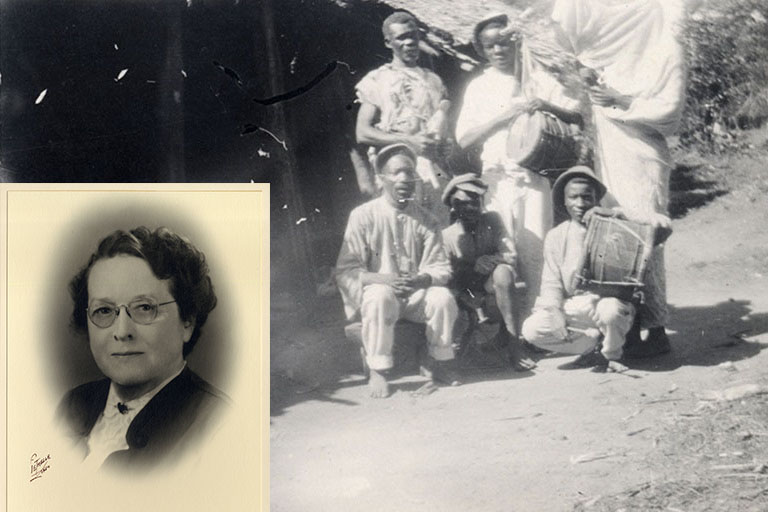 Born on June 12, 1888, Helen Heffron Roberts grew up in Chicago and eventually pursued education as a concert pianist at the Chicago Musical College and the American Conservatory of Music. Due to her poor health, and stimulated by an interest in anthropology, Roberts left the conservatory and went to study anthropology at Columbia University with Franz Boas from 1916-1919. Roberts realized her niche when she found that there was a need for ethnographers with the capacity to transcribe music. Her work on musical transcriptions enabled Roberts to work with many other ethnographers including H.K. Haeberlin on Salish music, Diamon Jenness on Copper Eskimo music, and Martha Beckwith in Jamaica. Later, she would help create the American Society for Comparative Musicology in 1933 with her colleagues from the American Musicological Society, George Herzog and Charles Seeger, and with Henry Cowell and Dorothy Lawton.

Martha Warren Beckwith’s career in ethnography did not begin until she was in her mid-thirties. Beckwith graduated from Mt. Holyoke College and taught English at Elmira, Mt. Holyoke, Vassar, and Smith Colleges before studying anthropology under Franz Boas at Columbia University. After earning a master’s degree in anthropology and a doctorate in philosophy, Beckwith returned to Vassar College after being appointed to the chair in Folklore, making her the first person at any college or university to hold a chair position in Folklore in the United States. Beckwith conducted ethnographical research in Hawaii, as well as in Jamaica and South Dakota under advisement from Franz Boas. Beckwith took four major trips to Jamaica during her time as a Research Professor at Vassar College, collecting folklore and music for five to six weeks at a time during her summer and winter breaks. While her research partner Helen Roberts was working to establish the American Society for Comparative Musicology, Martha Beckwith was serving as the president of the American Folklore Society from 1932 to 1933.

The ATM holds two collections of Beckwith and Robert’s research in Jamaica from the summer of 1921. The first collection, accession number 54-147-F, is comprised of 72 cylinders with documentation that includes recordings of Anansi Story Songs and many songs sung in English and Creole. The second collection, accession number 67-221-F, was deposited by Roberts over ten years after the first and includes one aluminum disc of fieldwork from their trip to Jamaica in 1921.