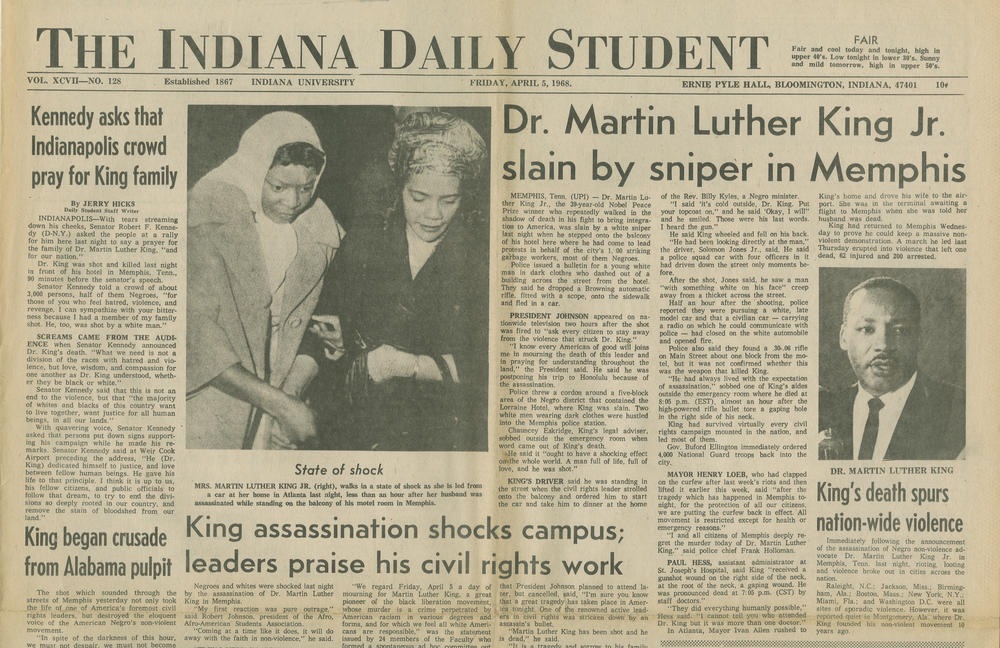 Wednesday, April 4, will mark fifty years since the assassination of Rev. Dr. Martin Luther King, Jr. in Memphis, Tennessee. The city of Bloomington will be remembering King’s life and legacy that day with a march from Rev. Ernest D. Butler Park. If you want to know more about the history of King, black social justice movements, and racism in America and at IU, come see us in the libraries or contact an IU librarian.

The day after King’s assassination in 1968, IU held a memorial service in the Auditorium. The University Archives holds several photographs of that service. Numerous collections and books in the Archives (e.g. the newly processed Sally A. Lied papers) and Lilly Library (e.g. The Black Student Voice, 1968) inform our understanding of race, racism, and social justice on campus in the 1960s. Both libraries currently have materials on display relavent to King and the Civil Rights Movement, the Archives with its Voices of ‘68 exhibit (through June 22nd) and the Lilly with its Welcome to 1968 exhibit (through April 20th).

IU community members and Indiana residents also have access to a large body of information about King, his life, his work, and his legacy. Digitized historical documents within the library collection include FBI surveillance files of King and other prominent African Americans, numerous records and papers relating to the Black Freedom Struggle in the 20th Century, and a collection of published work in the Black Thought and Culture database. In addition, visitors can find (or will soon find) new books about this important era in American history, including

Many of these works have tended to shift the focus beyond the story of King’s own life to understand the wide variety of contexts and legacies for black social justice movements.