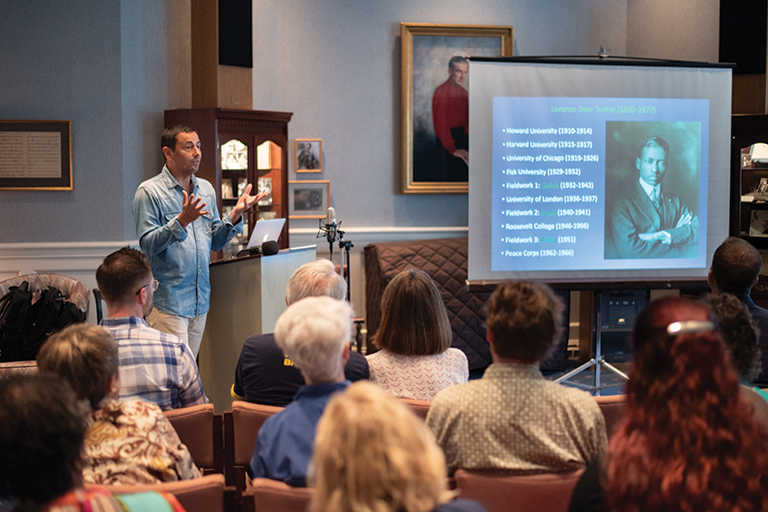 Photo caption: During the 2019 visit, Brazilian scholar Xavier Vatin shared his project work in a public forum hosted by the Archives of Traditional Music

The Archives of Traditional Music holds recordings made by Lorenzo Dow Turner, the first African-American linguist

It is hard to say what is more remarkable: The 90-year old Candomblé priestess listening to her 11-year-old voice overlap with that of her long-departed mother, or the scholar who brought the sounds 4,000 miles south to Brazil so she could hear them.

Xavier Vatin, associate professor at Universidade Federal do Recôncavo da Bahia, had his own moment of incredulity when he visited IU Libraries’ Archives of Traditional Music (ATM) in 2012 and was introduced to the recordings of Lorenzo Dow Turner by Director Alan Burdette. As an ethnomusicologist, Vatin knew of Turner’s own remarkable work as the first African-American linguist – primarily in Georgia and South Carolina. He was quite surprised, however, to learn of the 329 original field discs Turner recorded in the African areas of Brazil.

This story is excerpted from the IU Libraries 2019 Annual Report.

“I have been working for 25 years on recordings in this area and I am here only a few hours, and I am listening to Candomblé priests and priestesses from the 1940s. It was all extremely unexpected to me,” he said.

Unbelievably, Vatin has lived for years in the areas of Brazil Turner visited for the recordings. Quickly Vatin determined he would find a way to bring back the 80-year-old sounds to the families still in the area. Partnering with Cassio Nobre, a Brazilian with an ethnomusicology PhD, Vatin embarked on the Afro-Atlantic Legacies project. In the summer of 2019, a fellowship with the IU Institute for Advanced Study brought them back to IU to collect film footage for a grant-funded documentary chronicling their digital repatriation work.

With funding from the Brazilian Ministry, 1,000 copies of a 2 CD-set and catalogue describing the recordings have been distributed to Afro-Brazilian religious communities and published online. A second volume was released in October 2019, featuring 4 CDs, a catalog, and the new documentary film.

“I have very close relationships with some of the communities,” said Vatin. “I know their sons and daughters. To them, a few minutes of these recordings are extremely precious.”

On the most recent visit, Vatin and Nobre were surprised once again by Indiana University. In collaboration with the IU Media Digitization and Preservation Initiative, ATM was able to present new digital copies of the Turner recordings, taken directly from the original field disks. The quality is quite improved from the open-reel tape copies Vatin first heard in 2012.

It is these newer sounds that are now being shared.

“For ethnomusicologists everywhere, this place... it’s like a sacred place.  Everyone in our field knows about the Archives of Traditional Music.”