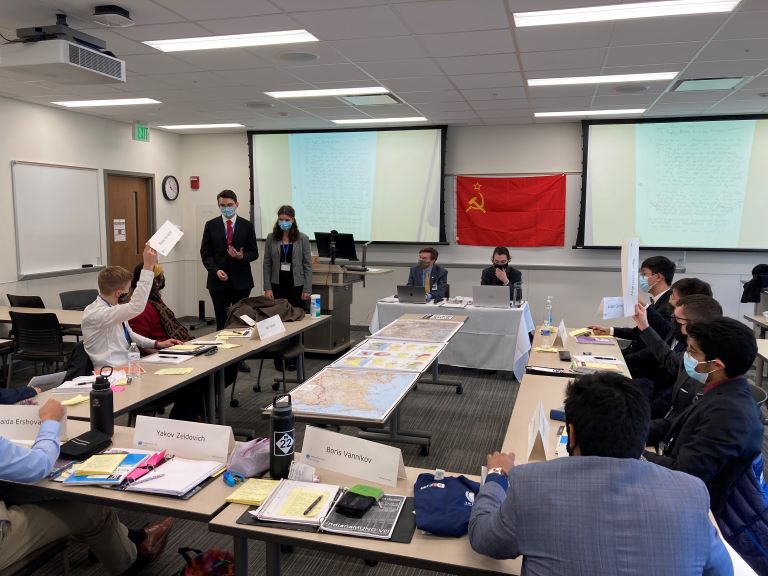 The Wells Library can lead to marvelous, mysterious places. Government Information, Maps, and Microform Services, lovingly referred to as GIMMS (pronounced like gems), is such a place. If you travel up the white steps on the west side of the lobby – or take the East Tower elevator – the far-left door will take you into a big room full of flat metal drawers, old maps of Indiana on the walls, and machines for reading microfilm from decades’ past. This is the home of IU Libraries’ phenomenal map collection, which is the largest in the state of Indiana.

Media and Map Services Assistant Heather Sloan explained the importance of maps and the various ways students and faculty use them to deepen their research. “Maps enhance people’s understanding when they are trying to visualize a situation or a time,” Sloan elucidates. “The various things you can unpack in terms of critical thinking are a good mental exercise and a good way to open one’s mind to what kinds of biases go into map making, intended or not.”

One example of map outreach is the work GIMMS has done with the Indiana Model United Nations (IndianaMUN).  Each year, IU students tackle the job of mentoring Indiana high school students to participate in a mock UN session. In 2019, IndianaMUN senior Andrew Greco reached out to GIMMS. Assigned the topic of the Peloponnesian War, he wanted maps with accurate landforms, but some information hidden as well, so the high school students would generate knowledge on their own.

Sloan says, “They (IndianaMUN) used them all weekend, learning about that period, engaging with what had happened, but also looking at what could have happened.” The maps made such an invaluable learning tool that GIMMS was contacted in subsequent years. “This web of activity just keeps expanding,” Sloan explains with excitement. “The process,” she says, “is one of contact, reference interview, map scanning or pointing to digital maps that are already scanned, and they take it from there.”

This year, Kyle Tucker, an International Studies major focusing on Slavic Languages and Cultures, mentored his UN team on the topic of Soviet Nuclear Development. Sloan states, “We started with maps from 1944, 1968, and 1972 – things we had we thought would be useful. They spent the weekend engaged in the maps.” After the mock UN, Tucker wrote Sloan saying, “All of the high school students in my committee actively participated, and I was told the three maps you scanned greatly enhanced their immersion and learning about the USSR and the Soviet atomic bomb project. Throughout the weekend the students consulted the maps, utilized them in their speeches, plus the maps enhanced the realism of their planning.”

“It’s great because the undergraduates we do instructional sessions for,” Sloan shares, “don’t have a lot of prior experience looking at maps. A lot of what they’re experiencing is new.” For Sloan, it’s great that these IndianaMUN high school students interact with maps. She is delighted they “will be able to have meaningful engagement with a primary source."

Sloan is enthusiastic about maps helping students with their research topics. When she talks about student projects, she has a big smile. “I love the maps so much. One of the things I love about this job is I get to hear about everybody’s project and how they’re using maps. I’m always amazed!” She marvels how every field of study can potentially find a way to represent itself on a map.

“We do a lot of instructional sessions for military history courses,” Sloan explains. Map and Spatial Data Librarian Theresa Quill has developed a curriculum concerning visual literacy and maps. The focus is on how to read and engage with maps, using critical thinking skills. When working with a class, Sloan and Quill ask questions such as “Who made the map? What era was it made in? Would there be motivations for where things are placed? What’s on it? What’s not on it?” After discussing such questions and how maps can be biased, various maps are placed throughout the classroom. Groups study maps, asking the critical thinking questions. Sloan says, “There’s always something in every session where we go, ‘Ah. I never thought about that.’”

One of the map collection’s strengths is the Soviet Union and the Eastern Bloc. Quill and her team won an Excellence in GIS award for the digitization of Russian maps. These maps have been georeferenced, meaning when you click on the digital version of the map it shows up on the globe where it’s located physically. When asked about Ukraine, Sloan notes that donor Michael Humnicky gifted the earliest maps of Ukraine in the GIMMS collection. The two oldest are from 1616 and 1737. “The maps are intact and beautiful,” Sloan adds.

GIMMS is here to help you

Besides military maps and Indiana maps, the collection boasts imaginary maps from famous fiction like A Song of Ice and Fire (otherwise known as Game of Thrones), Lord of the Rings, and Harry Potter.  Sloan notes that GIMMS has many maps that aren’t cataloged yet, but they are still available.  Ask the staff if you cannot find what you are looking for.

Sloan feels maps being housed with government documents are a great fit. "Under the leadership of Government Information Librarian Emily Alford, we are also the winner of the Federal Depository Library Program (FDLP) Library of the Year for 2020.” We have information on voter registration and access to a “ridiculous amount of government information.” GIMMS also has atlases, globes, archival material on microfiche and microfilm, plus a friendly staff.

“Maps can be used for so many different projects. It’s useful for so much research,” Sloan says. “I find these things work in tandem with each other – availability of government information, the digital aspect of having map image collections online, and the georeferencing aspect.” She points to GIMMS YouTube videos online and workshops about digital mapping tools like ArcGIS and QGIS. Sloan adds, “People can learn those basic skills of actually creating their own digital map or finding a base map and putting their own layers on top of it. It adds dimension to any field. Going from physical primary sources to generating something people can interact with is a plus.”

Contact GIMMS online at their website or come on up to the second floor and visit them.

Mapping and the internet

“Mapping has exploded,” Sloan says. An example here at Indiana University is GIS Day and GEO Week, during which IU Libraries, and partner the Institute for Digital Humanities, have sponsored inspiring speakers such as Borderlands Project’s Maira Alvarez and Sylvia Fernandez, and Heidi Rae Cooley, who’s interested in mapping people in motion in our cellular world.

Maps are not as simple as they might seem, however. Community and humanitarian mapping raise issues. For example, members of GIMMS staff are working on indigenous mapping. Sloan explains, “It is difficult to collect in that area because some of the history is shared orally.” Some landscape features like trees may have indicated a trail marker that may no longer exist.

Privacy and ethics are other issues easy mapping on the Internet have brought to light. Sloan uses the example of mapping lesbian bars. “No generation is a monolith in regard to their identity.” Older lesbians have not all accepted the word “queer” and think of it as a slur whereas young lesbians may embrace the word. Which do you use? “It’s not just what you put on a map and where you put and what you call it, but all kinds of ethical considerations,” Sloan says.

Another example is the work she is doing personally with her Dominican mentor. “My Dominican mentor and I did a workshop this last November talking about ethical and technical considerations of mapping. We are studying the effects of deforestation on drum making for Afro-Dominican spiritual practice.” As the forest is threatened, these spaces become more important. To protect these special forest spaces, they cannot map specific locations. The solutions are to generalize and obscure unique information like street names. Sloan asserts that it’s important to make sure everyone affected is part of the process. “There are a lot of questions to ask even before you get started.” There is a balance needed between getting information out and protecting people.

For an overview of how technology and the IU Libraries can enhance and broaden research, see Sloan’s blog post “Intersections: Technology, the Arts, and Collaborative Scholarship.”