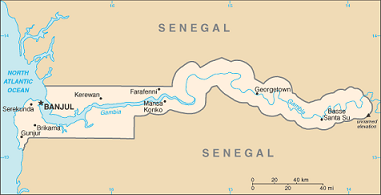 While the United States held inauguration celebrations for its new president this weekend, the citizens of Gambia waited to see if their president would relinquish power to their country’s newly elected president.

Gambia’s leader, Yahya Jammeh, who came to power 22 years ago through a coup, and once proclaimed he would rule for 1 billion years, initially accepted defeat in the December, 2016 election, but then called for a new election citing voting irregularities.

He subsequently refused to step down as president.

President-Elect Adama Barrow took the oath of office January 19, 2017 in the Gambian Embassy in Senegal. It was the closest his team determined he could safely get to Gambian soil.  He had left the country last week to meet with West African leaders to discuss the transition. The Presidents of Liberia, Mauritania and Guinea arrived in the capital city of Banjul on January 20 to negotiate Jammeh stepping down.

Jammeh finally agreed to go into exile on Saturday, January 21, 2017.

Once he left, it was discovered that he had plundered the treasury and stole at least $11.4 million US in the weeks preceding his exile. He also shipped several luxury cars out of the country.  According to The Guardian, his plane stopped in Guinea, where he has kept a lot of assets, before settling in Equatorial Guinea.