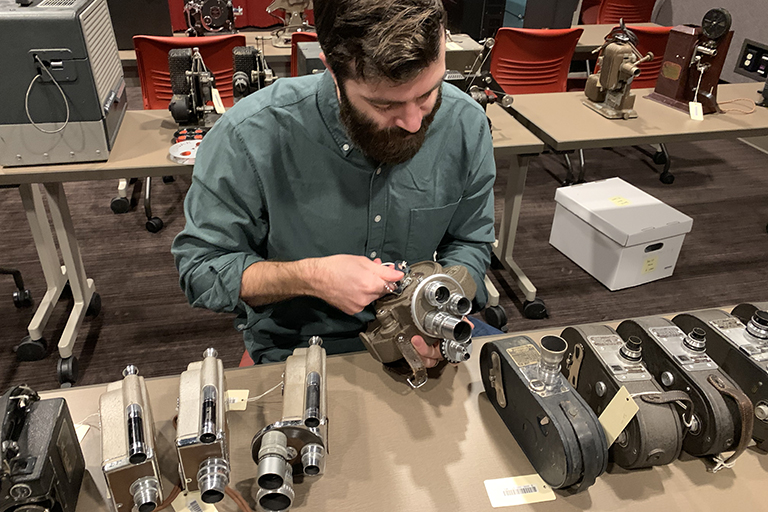 As soon as he started his Masters program in Cinema and Media Studies at Indiana University's Media School, Allison went to visit the IU Libraries’ Moving Image Archive, also known as IULMIA. He knew nothing about what they did. Intending to volunteer, he approached Director Rachael Stoeltje. She hired Allison as a student archivist.

“I never left,” he said. “Once I got to see behind the curtain and the work they were doing on a daily basis, I said to myself, ‘This is where I need to be and spend my time.’”

Now a Ph.D. candidate and instructor, Allison has worked for the Archive for five years. “Part of the allure of the archive is that they are constantly doing new things. Reaching across departments, collaborating with other institutions, with other filmmakers, with collectors…with so many people that you get to dip your hand in a lot of different things. I’ve been able to catalog films and process film collections and to work on technologies. I’ve been able to work on a small gauge camera and projector from the Alan Lewis collection.”

Allison’s passion is infectious. “IULMIA has been the inspiration and the impetus for my scholarly research. I think all the practical and theoretical and research-based knowledge that I’ve gained at the archive just informs my research, as well as I’ve got my foot in film production as well. All these threads come together so nicely. It’s hard to disentangle them. I’m trying to find interesting ways to bring those threads together and the archive lets me do that.”

IULMIA values its student workers, pulling from both the Media School and Luddy’s Information Science programs. Allison points out that although a small unit, “they manage a massive collection, multiple collections.” IU protects one of the largest education film collections in the world. Bearded and bright-eyed, Allison continues: “The fact that they let students come in to help work on these projects, gives students a step up when they start to look for their own careers in the library field, or the moving image field, or, in my case, academia.”

Jorgensen, an education alumna, has had a lifetime relationship of giving to Indiana University. From a film-loving family – her brother is David Anspaugh, director of “Hoosiers” – she has a keen interest in IU Cinema and IULMIA.

Allison is thankful for the times he has met Jorgensen. “She is so generous and a wonderful, energetic personality that really comes through. She’s the whole reason why this fellowship and many other activities and opportunities are available on this campus.” His appreciation for Jorgensen is palpable. “She is always looking for opportunities to give back to IU first of all, but also to give students a chance to further their own careers, research, and scholarship in creative ways.”

When it comes to philanthropy, Jorgensen likes to do what is needed instead of what is expected. “I seem to be attracted to doing things that no one else is doing,” she comments about herself. “I ask questions: What don’t we have? What’s the wish list? What do you wish you could do if you had the funds to do it?”

Though she had talked to him over Zoom and email, Jorgensen met Allison in September face-to-face at the book signing for Jon Vickers’ and Brittany D. Friesner’s Indiana University Cinema: The New Model.

Jorgensen, who wrote the foreword for the book, gave her IU Cinema pin to Allison that day. He had just passed the qualifying exams for his Media Studies Ph.D. “Relationships aren’t simply valuable; they are necessary,” Jorgensen says. “Philanthropy and relationships go hand and hand. It is imperative that I have those.” Jorgensen returns Allison’s appreciation and gratitude. “I am so impressed with the caliber of people involved.”

Jorgensen’s talent extends throughout IU. She was instrumental in creating the Women's Philanthropy Leadership Council, has funded scholarships for the IU School of Education's Global Gateway for Teachers, has helped support the Jorgensen Guest Filmmaker Series, and is a 2019 recipient of the Distinguished Alumni Service Award, among several other leadership awards. This past spring, she funded the Jane Jorgensen Diversity, Equity and Inclusion Internship through the Office of the Vice President for Diversity, Equity and Multicultural Affairs.

Allison feels old perceptions still exist for librarians and archivists. “Archives collect the material and then offer access to scholars to do research on it,” he explains. “However, especially having worked now at the archive for a few years and getting to see the work they do, they are constantly engaged with research and high-level scholarship every single day. It’s hard to say they are also not scholars. They are archivist scholars in my mind.”

He hopes the Jorgensen IULMIA Fellowship helps to dismantle the stereotype of “a service-based relationship where scholars go to the archives for materials. They are both working collaboratively together to produce knowledge.”

“For me, the Fellowship gives me the opportunity and the validation that what I’m working through and trying to work between – this interdisciplinary path I’m on between production and academia and the archive – it’s valid, it’s of benefit.”

Jorgensen calls the Fellowship “a unique bird of its own.” She applauds the IU Libraries who guided her to the ongoing and endless projects that needed doing in IULMIA. Jorgensen loved the ideas presented and the IULMIA Jorgensen Fellowship came to fruition.

The Fellowship requires that the recipient complete a project during their residency. Allison’s main project has been the restoration of western film from 1926; “The Sky High Corral.” Part of the David Bradley collection, Allison clarifies, “As far as they know, it is the only print in existence. It hasn’t been found anywhere else.”

He works on the intertitles with an image restorationist in the Netherlands, “the title cards in silent films explaining dialogue or action that might be unclear based on the image alone.” His goal is to “get a full picture of what the film would have been if you had seen it during its theatrical run.” It can be tricky, especially when footage is missing.

Working on this project has helped both himself and the archive. “I was able to intersect with Jane’s generosity and where the archive is looking for students to dig into what they have to offer in a little more depth.” He says that Jorgensen sees value in the IULMIA, and he feels lucky to be a part of that.

Jorgensen’s own introduction to IULMIA made a profound impression on her. She  took part in an official tour of the laboratory where film footage is worked on. Having grown up with home movies, she asked tour guide and director Stoeltje how home movies would fit in. In response, Stoeltje explained how the right equipment for the type of media makes preservation and digitization possible. “I learned so much in that little tour,” Jorgensen says. “Since then, my brother has utilized some of those skills.” She adds, “I am still learning what a tremendous asset Rachael Stoeltje is to the Libraries and IU in general.” Beyond IU, Stoeltje is well respected in her field Jorgensen notes. “It’s a very exact study. She’s in a small niche of her own, and to become an expert in that is pretty amazing.”

A Century of 16mm

The story does not stop there. Allison has reaped other advantages from Jorgensen’s support. “It’s hard for me to pick a single lane within my field,” the award-winning short filmmaker says. Being interested in the entire process, Allison has truly appreciated the Jorgensen Guest Filmmaker Series, which brings top-tier filmmakers from around the world to Bloomington.

Allison is also an expert, 16mm film being one of his main research interests. It’s the “collectors’ gauge of choice,” He explains. “At the time of its introduction it was the amateur’s film gauge and go-to medium.” The advent of 16mm made filmmaking accessible for the first time to organizations and wealthier or determined individuals.  It wasn’t until 1932 when 8mm came out – the home movie format – that “everybody could really dive in and start making their own movies.”

A Century of 16mm will be celebrated in 2023. “IU is going to be the hub for this grand celebration of all things 16mm.” According to Allison, Stoeltje and IULMIA are working overtime to secure funds to “commission films by prominent filmmakers, IU students, and IU alums who are shooting film on 16mm.” They also hope to “dig deep into the archives collection.” They will be hosting a conference on 16mm scholarship, and will have an exhibition of the cameras from the Alan Lewis collection, which will be co-curated by Allison.

The historic McCalla School, which is currently undergoing renovation and will house the Collections Teaching, Research & Exhibition Center (CTREC) will be the exhibition site during the event and the IU Cinema and the Moving Image Archive’s Screening Room will host the screenings.