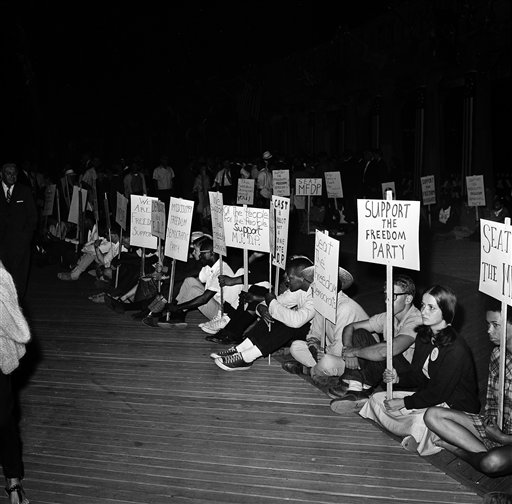 Warning: Watching the Freedom Summer documentary can easily cause anger over the gross injustices in our nation.

Mississippi Freedom Summer was a response to statewide racism in Mississippi toward black residents who wanted to vote. Even attempting to vote could severely impact a person’s life since many lost their jobs and were threatened and physically abused. Some counties posted names of people who went in to register, which created harmful consequences for these individuals and their families.

The Student Nonviolent Coordinating Committee (SNCC) coordinated the Mississippi Summer Project as an attempt to eliminate this continuing oppression of African American Mississippi residents. There were three components to the project: voter registration, Freedom Schools, and the Mississippi Freedom Democratic Party. Volunteers traveled to Mississippi and lived with host families. They taught Freedom Schools which provided African Americans an educational opportunity and also gave them a library when many of them were not allowed in the whites-only libraries. These volunteers also talked with people in their houses about details regarding voter registration.

This is simply a brief summary of the struggle to gain the black vote, which means that we skimmed over all the specific details and individual stories. Nevertheless, this piece of history exposes the detrimental racism in this country and the power of Americans who united together to push for change. As we come into this voting season, it is vital to recognize our political history and the importance behind your individual vote. Many African Americans were cruelly denied this right to vote and voice their political concerns.

We want to remind you that voting is an important part of democracy and encourage you to get out and vote. Your voice makes a difference!

For more information on this topic, here are a few IUB Libraries resources that cover African Americans in politics:

Voting rights under fire: the continuing struggle for people of color by Donathan L. Brown and Michael L. Clemons
The unfinished agenda of the Selma-Montgomery voting rights march by the editors of Black Issues in Higher Education with Dara N. Byrne
This bright light of ours: stories from the 1965 voting rights fight by Maria Gitin
When the letter betrays the spirit: voting rights enforcement and African American participation from Lyndon Johnson to Barack Obama by Tyson D. King-Meadows
Blackballed: the Black vote and US democracy by Darryl Pinckney
Black visions: the roots of contemporary African-American political ideologies by Michael C. Dawson
African Americans in Congress: a documentary history by Eric Freedman and Stephen A. Jones
The ticket to freedom: the NAACP and the struggle for Black political integration by Manfred Berg
American politics and the African American quest for universal freedom by Hanes Walton, Jr. and Robert C. Smith