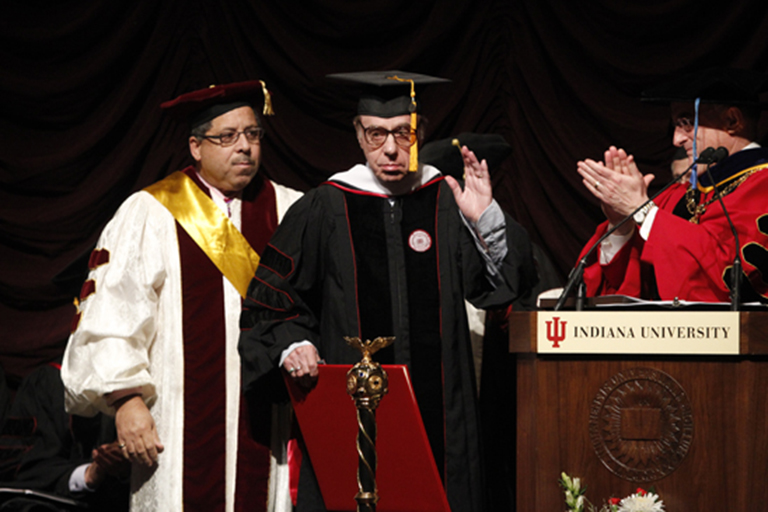 “From The Last Picture Show to The Cat’s Meow, every Bogdanovich film is richly allusive, drawing on the works of the directors he most admires. Such allusion comes naturally to Peter and reinforces his deep knowledge of Hollywood history.” ~President Michael A. McRobbie at the 2011 Dedication of IU Cinema

The passing of world-renowned filmmaker and film historian Peter Bogdanovich is inspiring not just film buffs and “Sopranos” fans to ponder his contributions to the world of moving images, but many others as well. There are insights at Indiana University’s Lilly Library, a rare books and special collections library, that houses the Peter Bogdanovich Collection with  holdings chronicling Bogdanovich’s life and work.

“He was in dialogue with the history of cinema,” says Erika Dowell, associate director and curator of modern books and manuscripts for Lilly Library. She goes on to explain, “That’s what is distinctive about Peter Bogdanovich. He wrote about film, and he interviewed important filmmakers for quite a long time before he became a filmmaker himself.”

On Jan. 7 the Lilly Library(@IULilllyLibrary) tweeted:

"We are saddened by the loss of filmmaker, film scholar, and keeper of the Old Hollywood flame, Peter Bogdanovich. He was always a joy to work with. We know his legacy will live on and we are proud to be the caretakers of his archive."

Lilly Library purchased Bogdanovich’s collection of scripts, production materials, film stills, and other materials in 1995. Another stash of items came in the mid-2000s, creating a large collection of 771 containers. Adding to the collection’s richness, Bogdanovich included personal papers and letters from his parents who fled Yugoslavia during the political instability leading up to WWII. The collection is categorized into eight sections: office, films, writings, financial, his parents, printed materials, mixed media, and additions.

Bogdanovich recorded hours of interviews with Orson Welles, John Ford, Alfred Hitchcock, and other directors, creating his own study of film. His scholarly work on the filmmakers of the previous generation helped forge the unique director he was. Dowell says, “It is interesting how he wove those two different activities together throughout his life.” This appreciation for the history of cinema was a driving force in Bogdanovich's moviemaking. Two of the renowned filmmakers Bogdanovich interviewed were already featured in unique collections housed at IU’s Lilly Library when Bogdanovich made his decision to leave his legacy at the Library: Orson Welles and John Ford.

In January 2011, Bogdanovich was present at the grand opening of the IU Cinema on the Bloomington campus. Then-Indiana University President Michael A. McRobbie awarded the film scholar and director an honorary Indiana University degree. Professor Emeritus Jim Naremore of Communication and Culture, a leading film scholar himself, introduced Bogdanovich saying, “Film director, actor, writer, critic, and film historian Peter Bogdanovich is one of the most versatile and accomplished figures in the history of American cinema.”

For his directing, Bogdanovich is known best for “The Last Picture Show,” “What’s Up, Doc?” and “Paper Moon.”  Nominated for eight Academy Awards, his film “The Last Picture Show” won two Oscars in the “supporting actor” category. In 1973, the Writers Guild of America gave “What’s Up, Doc?” an award for best comedy written directly for the screen. Winning its actors multiple accolades, “Paper Moon” was also hailed as a masterpiece.

Bogdanovich’s career didn’t simply go up. He struggled with financial trouble, and the murder of Dorothy Stratten, with whom he had an intimate relationship, was an additional source of difficulty. He did find balance later in his life, continuing to work in multiple ways. Not only did he act in “The Sopranos,” he was actively involved in a podcast The Plot Thickens. Produced by Turner Classic Movies, the podcast documents classic movies and those who made them; the entire first season focuses on Bogdanovich. Dowell shares, “He was often in touch with Lilly to get pieces to use.” Lilly Library staff frequently digitized selections from a film or a recording from an interview for him. His death was a sad and sudden surprise to Library staff as he very recently called to request a digitized recording.

Dowell points out this is a large collection with film and audio recordings. She invites students and researchers to explore the life of Peter Bogdanovich, starting with the Lilly Library website; click on “Ask A Question,” and fill out the inquiry form.  All Reading Room visits require an appointment a few weeks in advance, and all materials must stay at the Library because they are non-circulating.