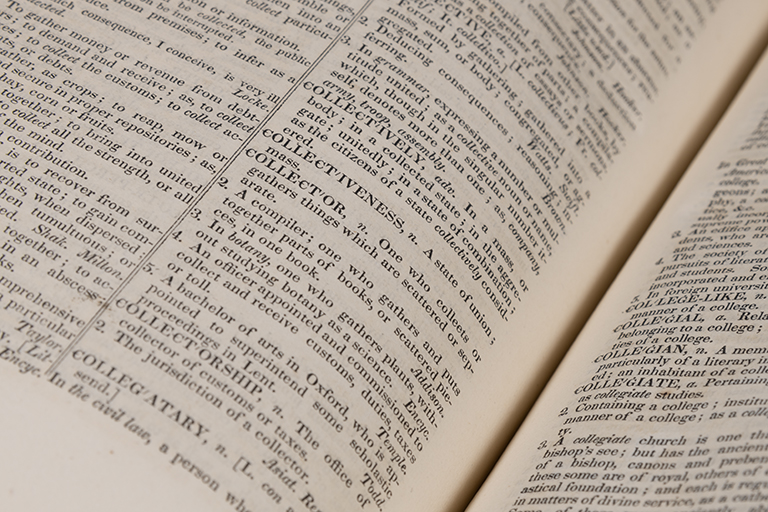 Honoring the Dame of Dictionaries on National Dictionary Day, Oct. 16, 2021

When America’s top dictionary editors and language scholars find themselves at a loss for words, where do they turn? For decades the illustrious Dame of Dictionaries, Madeline Kripke, answered the call. Her stockpile of more than 20,000 linguistic books and ephemera was often referred to as the world’s largest and finest dictionary collection. In fact, Michael Adams, Provost Professor and Chair of the English Department at Indiana University Bloomington, says Kripke spent the last decades of her life dedicated to building the collection and amassed “the most important collection of dictionary and related materials that has ever been curated by anyone.”

Above image highlights a few of the 70,000 entries in the Dictionary of the English Language by Noah Webster. Published in 1828 by S. Converse, it was a two-volume set, both of which are held at the Lilly Library in the original boards. Below is the exterior of the Lilly Library, image credit to Katie Harmon at Hawk Digital, 2021.

National Dictionary Day is Oct. 16 and marks the birthday of the father of the American dictionary, Noah Webster.

In celebration, the Lilly Library announces the establishment of the Merriam-Webster Archive, as well as the acquisition of the complete Madeline Kripke Dictionary Collection, of which the archive is a part.

Lindsay Rose Russell is the Executive Director of the Dictionary Society of North America as well as an Associate Professor at the University of Illinois at Urbana-Champaign. “I don't think it's possible to overstate the significance or charm of Madeline Kripke's collection: It's not just that it's big or that it contains all kinds of really important dictionaries. It's that, in it, pristine leather-bound volumes of field-defining dictionaries sit next to little-known or heavily-annotated dialect glossaries, tattered broadsides of underworld jargon, and all kinds of other invaluable lexicographical oddities few have heard of or thought to collect,” she points out. “And all of that material has the distinction of having literally lived with the most important dictionary collector of all time.”

In April 2020, Kripke died in New York City due to complications from COVID-19, having never realized one of her stated aspirations: establishing a public dictionary library. Her now-orphaned collection consumed nearly every inch of her fabled two-bedroom Greenwich Village apartment along with three New York City warehouses. Miles away, Indiana University Bloomington’s rare books and special collections library was in the midst of a once-in-a-generation renovation. Its own acclaimed dictionary collection was safely in storage, including an author-presentation copy of the 1828 An American Dictionary of the English Language by Webster.

Adams was well aware of the connection between IU’s Lilly Library and Kripke’s own collection, having called upon the Dame of Dictionaries through their shared membership in the Dictionary Society of North America, of which she was a founding member. He immediately began conversations with Lilly Library Director Joel Silver to acquire the Kripke Collection and bring it to Indiana University.

There were other libraries and booksellers interested, of course, but Adams was persistent and had a clear advantage in the Lilly Library. “It was of primary importance to the community of dictionary people that the collection stay together," he said. “But we knew Madeline would have wanted the collection to end up at a public university, where all the very rarest materials would be available to everyone.”

Indeed, the Lilly Library is not only known as one of the world’s great libraries, but is also renowned for its unrestricted access policy, proclaiming the collections are open to “all who are curious.” In the area of lexicography, those collections had already established the Library as a destination for dictionaries. Adams points to three primary reasons for that reputation: the Breon Mitchell Collection of Bilingual Dictionaries, 1559-1998; the Eric Partridge Archive, 1914-1966; and Clarence L. Barnhart Dictionary Archive, 1929-2005 (the latter two collections are still to be processed). 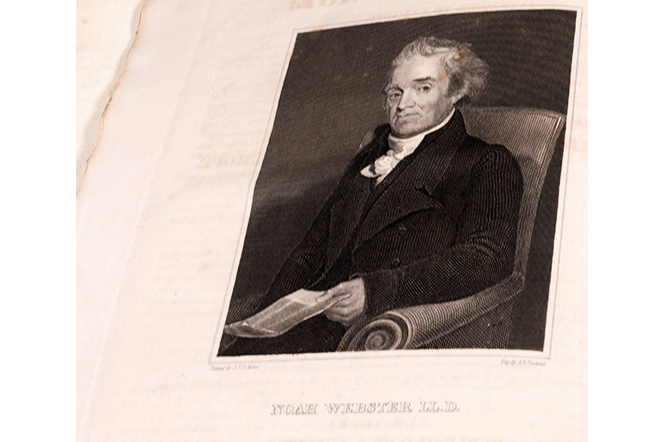 In addition to her many dictionaries, Kripke also held an uncataloged trove of correspondence and business records from the Merriam-Webster company, which will now form the Merriam-Webster Archive. It famously includes the original letter speculating on the benefits of purchasing Noah Webster’s 1841 edition of An American Dictionary of the English Language, Corrected and Enlarged.

"Madeline's passion as a collector and keen eye as an expert led her to discover something that no one knew even existed: the very first time the Merriam name was connected to Webster's dictionary," said Peter Sokolowski, editor at large for Merriam-Webster. "What had been misty lore is now a documented fact. Her archive makes the human story of bringing the first Merriam-Webster dictionary to market come to life in the competitive world of nineteenth-century publishing."

Webster is best-known for publishing the first American dictionary in 1806, a copy of which also resides at the Lilly Library. The connection to Webster was nearly life-long for Kripke. She was a fifth grader when her parents gave her a Webster’s Collegiate Dictionary, and often shared that it “unlocked the world for me.”

Having successfully acquired the complete Kripke collection and Merriam-Webster Archive, the Lilly Library will now spend decades of its own unlocking connections. About 6,000 volumes have been inventoried, likely less than a third of the final total.

“For such a collection to have been broken up would have been a tragedy; for it to remain together in the company of the Lilly's Library's other august dictionary collections is a true gift,” said Russell.

Cataloging the collection is a challenge librarians and faculty look forward to once the materials arrive in Bloomington. “We’re very pleased to be able to preserve Madeline Kripke’s remarkable collection here at the Lilly Library,” said Director Joel Silver. “We’ll always be grateful for her unrivalled knowledge and dedication, which enabled her to assemble this matchless resource. We look forward to making it available to all interested researchers and visitors for many decades to come.”

"It's not just that it's big or that it contains all kinds of really important dictionaries.

It's that, in it, pristine leather-bound volumes of field-defining dictionaries sit next to little-known or heavily-annotated dialect glossaries, tattered broadsides of underworld jargon, and all kinds of other invaluable lexicographical oddities few have heard of or thought to collect."

- Lindsay Rose Russell, Executive Director of the Dictionary Society of North America,  Associate Professor at the University of Illinois at Urbana-Champaign

Included in the Lilly Library collection is a signed copy of volume one of Webster's 1828 edition of An American Dictionary of the English Language. It is inscribed with handwritten words that read, "William W. Woolsey, presented by the Author," followed by a penciled note, "Presented by Jn. W. Woolsey to his friend N. Chauncey."  Adams says the 1828 dictionary was a failure in publishing terms.  As documents in the Merriam-Webster Archive illustrate, the Merriam brothers purchased Webster's work and future publishing rights, successfully commercializing the production of dictionaries in America.

An unassuming volume of circus terms is valuable for its preservation of the culture of those working in the industry at the time of its publishing.

Self-published by George Brinton Beal in 1956, this Circus Glossary is one example of the numerous rare materials in the Kripke Collection documenting terms specific to an industry or community of people. At the time of his death in 1957, Beal was quite famous for his writings about circus life, earning him the moniker, "Beal of Boston, the Circus Man’s Friend."

"Madeline still had the collectors' hope," said Adams. "She believed that the next day she would wake up and find a fine copy of something she was looking for."

About the Lilly Library

Known around the world, IU Libraries’ Lilly Library is home to collections of cultural and literary artifacts illuminating humanity’s highest achievements. Between 1954 and 1957, Josiah Kirby Lilly, Jr. donated his collection of rare books and manuscripts – widely considered to be one of the finest private libraries in the world — to Indiana University.

As he had envisioned, these 20,000 printed books and 17,000 manuscripts had a transformative effect on the intellectual life of the university, and in turn, the state of Indiana. In October 1960, J.K. Lilly and then IU President Herman B Wells together opened the doors to the new Lilly Library and its collections – a total of some 100,000 printed books and nearly 1,000,000 manuscripts.

Today, thousands travel through this same building threshold to reach the ever-expanding collections of more than 480,000 rare books, 8.5 million manuscripts, and one of the world’s largest collections of mechanical puzzles. A few of its most famous items include the New Testament of the Gutenberg Bible (ca. 1455), the First Folio of William Shakespeare (1623), the first printing of the Declaration of Independence (1776), and a rare first edition of Edgar Allan Poe’s Tamerlane in original wrappers (1827). Archival collections include the childhood diaries of poet Sylvia Plath, early radio and film scripts of Orson Welles, and drafts and letter of authors such as Kurt Vonnegut, Jr. and Ngũgĩ wa Thiong'o.

A full-scale interior renovation, completed in June 2021, reimagined the iconic facility to attract modern learners. Visitors are now greeted by elegant, modernized public galleries designed by national experts in library and museum display. Infrastructure improvements created access to technologically enhanced seminar rooms and a new lecture hall, greatly increasing the spaces available for instruction and events. An inspirational cycle of murals in the Reading Room is the visual centerpiece of the renovation. 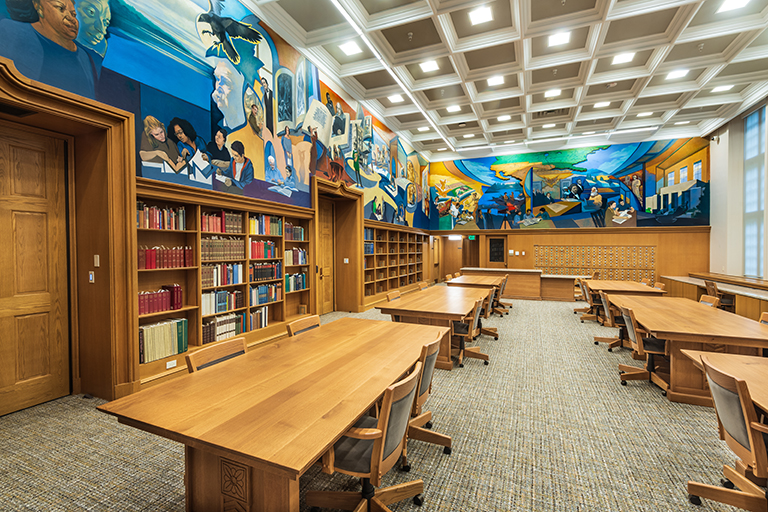