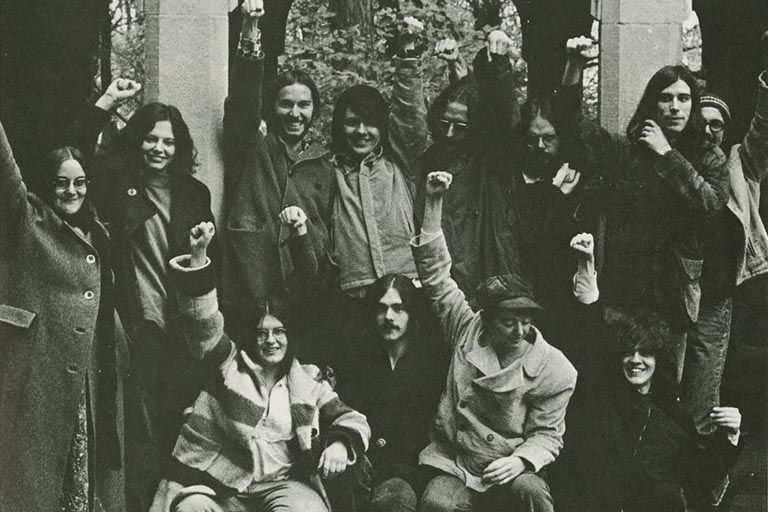 "An Army of Lovers Cannot be Conquered”: Exploring the History of LGBTQ+ Student Life in Bloomington

Over nearly three decades, the IU Bloomington LGBTQ+ Culture Center has grown to support the growing LGBTQIA+ student population. However, the history of this community didn’t just begin in 1994 with its formation. There’s a longer documented story of LGBTQIA+ student life at Bloomington that we don’t always get to see. In the early 1960s, Ernestine Eppenger attended Indiana University and was involved with the NAACP. After graduating she would go on to organize and participate in activist events with what was at the time called the “homophile movement.” In the 1970s, a number of local LGB activist organizations sprang up and provided a political as well as social outlet to many members of IU. It was university affiliated student groups like the Board of Aeons and the Student Senate that would pass resolutions in the late 1980s calling for the creation of an office on campus specifically to address the growing needs and concerns of LGBTQIA+ students. These concerns would prove to be what urged the creation of the LGBTQ+ Culture Center. Despite controversy and a threat from a state congressman to cut the university budget, students rallied to protest in support of the new center, which opened quietly with private financial support.

Today, Bloomington features a large and diverse LGBTQIA+ community supported by a number of local institutions, from the culture center to Bloomington PRIDE to the Queer Student Union. This exhibit from the University Archives features just some of the images, objects, and stories of this history.