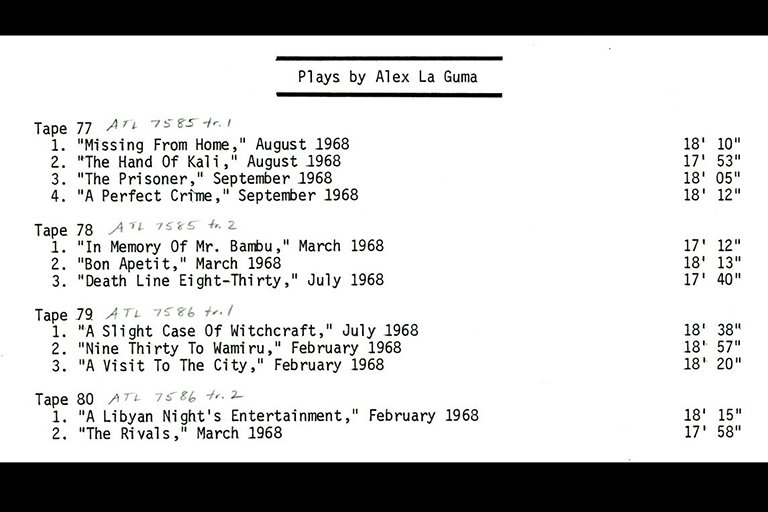 Scholars know the ups and downs of following research threads. Seeking can be frustrating, but finding: exhilarating. Imagine a determined scholar discovering little-known works by an established writer and publishing them for the first time. The next stop: an unassuming audiovisual archive in a Midwest university.

The scholar is Professor Christopher J. Lee, who teaches History and Africana Studies at Lafayette College in Easton, Pennsylvania. The revelatory repository is the Archives of Traditional Music, known as the ATM at Indiana University, and around the world.  The writer is Alex La Guma (1924 –1985), one of South Africa’s best known novelists.

The Institute for Advanced Study is hosting “Exile and the Audio Imagination: The Radio Recordings of Alex La Guma (1925-1985)” at 1:30 p.m. on Oct. 27. Lee says he will be “providing an overview of Alex La Guma's life and the importance of the collection at Indiana.”

The Archives of Traditional Music and the Institute for Advanced Study

Researching the last of his trio of works on La Guma, Lee found new materials in Indiana. IU's Institute for Advanced Study named Lee one of its 2021 Repository Fellows, funding some of his work with the ATM to explore La Guma’s radio plays and audio interviews preserved in its collections.

The Archives of Traditional Music is an ethnographic media archive, meaning it focuses on recordings of music, language, and other kinds of expressive culture from around the world. It is one of the largest, university-based archives of its kind in the United States. In accordance with its values, the ATM “engage(s) overlapping international and interdisciplinary communities of archivists, librarians, scholars, depositors, technologists, performers, and patrons to effectively preserve and provide access to their holdings.” As an archive of music, plays, interviews, radio broadcasts, and much more, the ATM is one of the IU Libraries’ participating repositories for the Institute for Advanced Study Repository Research Fellowships, which is designed for scholars outside of the IU system.

Born and raised in Cape Town, Alex La Guma is a canonical writer in South African literature. Best known for his first novel A Walk in the Night (1962), he is read by many high school students in Africa and around the globe. Lee wishes to “illuminate the wider world that La Guma was a part of.” Besides being a novelist, La Guma was an anti-Apartheid activist. Along with Nelson Mandela, La Guma was one of 156 defendants accused of treason in 1956. After being imprisoned and under house arrest, La Guma and his family went into exile in London. From there, he traveled the world, eventually dying in Cuba in 1985 while serving as the African National Congress’ chief representative and diplomat for the Caribbean and Latin America.

Lee says, “La Guma is an activist who committed his life to the struggle, but didn’t get to see the new South Africa. In this sense, he’s a tragic figure who never got to see the post-Apartheid South Africa he dreamed about. He died nine years before Nelson Mandela was elected.”

Lee first went to South Africa in 1995, and he later lived in Cape Town for two years. Explaining that "La Guma’s exiled writings and radio plays aren’t well known or well read,” Lee is particularly interested in showing that La Guma’s exile work is not extraneous, but vital to understanding his life and political commitments. “He traveled the world both as a writer and as an activist, promoting the anti-Apartheid struggle, while also working with other post-colonial writers. He had this rich and robust life while abroad. I don’t think many people know that. He had this life in exile that I think also deserves attention,” Lee states.

To that end, Lee published a new, critical edition of  A Soviet Journey (1978) in 2017. The first of a proposed triology of books on La Guma's exile years, Lee says La Guma’s work on the USSR is important because "it is one of the longest accounts of the Soviet Union by an African writer.” At the end of this year, Lee’s second book on La Guma will be published, entitled  Culture and Liberation: Exile Writings, 1966-1985. This volume is over 600 pages long, much of it consisting of essays, reportage, and stories that have never been collected or published in a book before.

With the support of IU's Institute for Advanced Study, Lee is working on the final installment of his research on La Guma: a book focusing on the writer-activist's radio plays, which were produced in London. Though he also collaborated with the Schomburg Center for Research in Black Culture in Harlem, Lee primarily worked with the Dennis Duerden Collection and the Lee Nichols African Writers Collection at IU's Archives of Traditional Music.

These collections contain radio scripts recorded during the 1960s and 1970s with authors, playwrights, poets, musicians, and other artists and creatives from across the African continent. The collections at the ATM are managed by Director Alan Burdette, Collections and Cataloging Librarian Allison McClanahan, and Administrative Assistant Cobie Ball. Lee expresses how they were extremely helpful. He would find what he needed through the collection guide, let them know, and Cobie would send him the material digitally that he could then download. The research has been “shaped by COVID,” Lee says. If the recordings weren’t digitized, COVID-19 would have prevent Lee from pursuing his work.