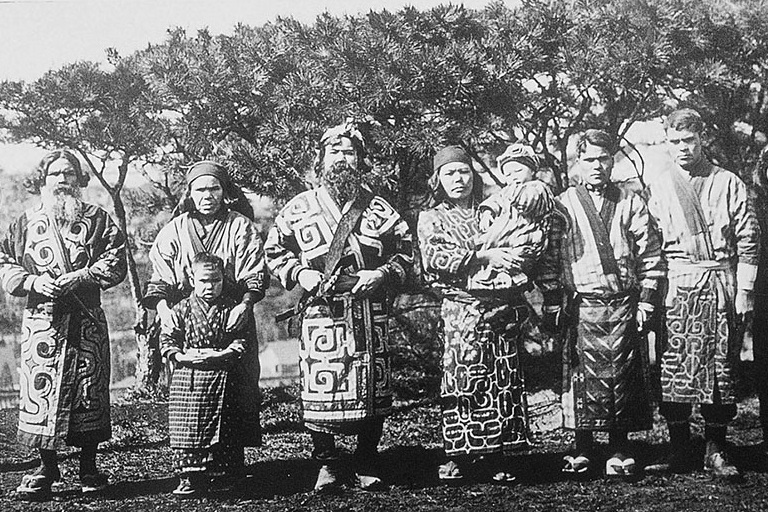 This collection holds narratives and songs of the Ainu people collected by Kyojiro Kondo (1913-1975). The Ainu are an ethnic group whose population numbers 23,782 (2006) in Japan’s northernmost prefecture, Hoikkaido. The Ainu have been increasingly assimilated by the predominant Japanese population and are regarded by some as an endangered culture.

In the mid-20th century, musicologist and linguist, Dr. Kondo worked to preserve and disseminate Ainu folklore. In particular, he tried to popularize Ainu songs. He wrote articles on Ainu songs and contributed to Hokkaido Shimbun, a regional newspaper, and these articles, issued in 1959, are documented in the Archives' collection with English translations. In addition, Kondo transcribed Ainu songs in musical notation, created Japanese versions, and published records and anthologies of Ainu folk songs. The last song in this collection, which is called “Pirika Pirika,” has become widely known as choral music in Japan in part through his efforts.

Each song or narrative begins with a short introduction by William Anderson Murphy, who worked with Kondo in Hokkaido to study and document Ainu cultural heritage. Several songs in this collection contain prayer or celebrations for gods called kamuy. Ainu cosmology holds that everything in nature has kamuy and their life is blessed with the gods. For example, iyomante is a ceremony for sending bears’ spirits back to heaven. By performing various dances in the ceremony, Ainu express gratitude to the gods.

Such Ainu indigenous culture and customs originated in the 13th Century as the Okhotsk and Satsumon cultures merged on Hokkaido Island. The Ainu started trading with Wajin (dominant residents of mainland Japan) in the southern area of the Island. Consequently, after the Meiji Restoration in 1868, the Ainu were oppressed by the Japanese Meiji government which passed an assimilation policy (the Hokkaido Aborigine Protection Act in 1899), labeling Ainu as former aborigines. They were prohibited from conducting daily customs and were colonized by increasing number of Wajin from mainland Japan.

In the late 1970s, an Ainu cultural revival movement developed and, as a result, in 1997 Japan abolished the Hokkaido Aborigine Protection Act and replaced it with the Ainu Culture Law in order to preserve, maintain, and revive the Ainu culture. Kondo’s collection represents an early effort to preserve and disseminate the Ainu traditional culture.