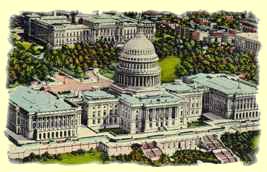 Indiana University's Center on Congress: The central goal of the Center is to improve public understanding of Congress.

Congressional Hearings on Video: Streaming videos of committee meetings of the U.S. House of Representatives as they happen. Videos are archived from January 2012 through the present.

GovInfo: The information provided on this site is the official, published version and the information retrieved from GovInfo can be used without restriction, unless specifically noted. This free service is funded by the Federal Depository Library Program and has grown out of Public Law 103-40, known as the Government Printing Office Electronic Information Enhancement Act of 1993. Replaces FDSYS (Federal Digital System) which will still be available until December 2018.

CQ Almanac Online: Provides coverage of congressional legislation from 1945 to today. Provides analysis of legislation through Congress, including how bills are changed, derailed, or passed. Coverage: 1945- present

CQ Congress Collection: A research and reference tool for historical analysis of members of Congress, their voting behavior, and the legislative process. Coverage: 1981-present.

CQ Voting and Elections Collection: A research and reference tool for voting and elections at the state and federal level, including demographic data, bibliographies, and encyclopedia entries. Coverage: 1800-present; primarily 1968-present.

Learn about the Legislative Process. From the U.S. House of Representatives.

Legislative Process. From the U.S. Senate.

Maps and Data from the Census Bureau: Find district maps among other information.

Other Information of Interest: