Growing Indiana University: The Legacy of Herman B Wells 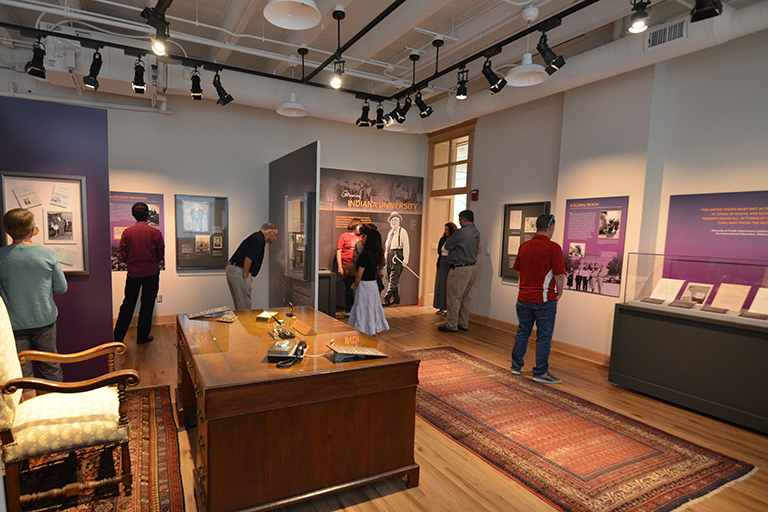 In 2018, Indiana University Collections was created to bring together all of IU’s diverse and unique collections under one umbrella. These 250 collections can be combined and displayed in the newly renovated historic McCalla School. The bright and inviting space, now known as University Collections at McCalla, contains multiple galleries, interactive digital displays, and a media gallery for moving image content.

Not only is the main library on campus named after the most celebrated president of Indiana University, but it also houses many of the archival materials related to Wells’s legacy. Dina Kellams, Director of the University Archives, shared how the exhibition collaboration evolved. “When the McCalla Center decided they wanted to do an exhibit on Herman Wells, they reached out to University Archives, the Sage Collection, Campus Art, and Kinsey as well. We talked about what areas we wanted to highlight because this is not large enough to encompass Herman Wells.” She points to the first half of the exhibit, dominated by Wells’s desk, photographs, and primary source documents.

Kellams continues, “We decided we wanted to focus on his life as a Hoosier, his work around the world and to bring the world to Indiana University, and also his work with students.” To that end, there are photos from his childhood, awards from abroad, and the Santa suit he wore to visit student events during the holidays. “Brad Cook, Archives photo curator, shared some of his favorite photos and let the exhibit designer select from that,” Kellams says. “I shared some collected quotes that I had from Herman Wells, so they could put them in the different spots.” Above the well-known photo of Wells signing diplomas is this gracious quote from Wells: “The University doesn’t owe me any thanks. Quite the contrary, the obligation goes the other way. Because it has given me a chance to have wonderful work, with wonderful people, my whole life.”

Like the entire exhibit itself, the labels describing the objects and leading participants through the displays were a collaborative effort. Kellams shares, “University Historian Jim Capshew started us off writing a lot of the text, and then Brian (Woodman) and I did a lot of the massaging and editing and changing it up a little bit and writing the captions.”

Besides letters and documents, the University Archives provided one of Wells’s signature accessories: his cane. “That came to us a couple of years ago,” Kellams explained. “Wells had given it to one of his friends, and his friend gave it to us.” To go with the cane, the Sage Collection provided Wells’s signature hat as well as the Santa suit, a business suit, and a childhood outfit. Kellams noted that pulling documents for the exhibit was a lot of work, but “it wasn’t as labor intensive as I expected because the University Collections folks are just so wonderful to work with. They did so much of the heavy lifting, and then of course the wonderful exhibit designers did so much work.”

Dr. Woodman also worked with IU Libraries Moving Image Archive on audiovisual content. Director Rachael Stoeltje and Moving Image Curator & Digital Initiatives Lead Carmel Curtis gathered possible films, audio, and film clips, working through copyright and digitization issues to make sure materials could be used. The addition of moving images to the exhibition creates a closeness that cannot be achieved in objects alone. To hear Herman B Wells himself explain to the people of Indiana what the university is striving for in the 1953 film “Helping Students Help Themselves” is to physically hear the great orator state goals for IU that resonate today. He explains the research and teaching mission while encouraging students to be the best they can be.

In “Campaign for IU Appeal,” Wells speaks directly to donors and alumni, promoting giving to the university, stating that higher education institutions are essential to the workings of a civil and democratic society. Along with actual footage and audio of the president, the moving image component of the exhibition contains IU education films from Wells’s tenure. For example, the 1940 film “Indiana University: 150 Years,” which does include quotes from Wells’s Inaugural Address, shows students in all capacities of student life: going to class, studying at the library, working in a myriad of venues, and participating in extracurricular activities.

Growing Indiana University: The Legacy of Herman B Wells, along with several other exhibitions, will be shown through June 7, 2023. June 7th is Wells’s birthday. To learn more about IU’s eleventh president purchase Being Lucky, his fully restored memoir from the Indiana University Press, available as an ebook or in print. The volume and other books and materials about Wells can be found in the library with his name, the Herman B Wells Library.