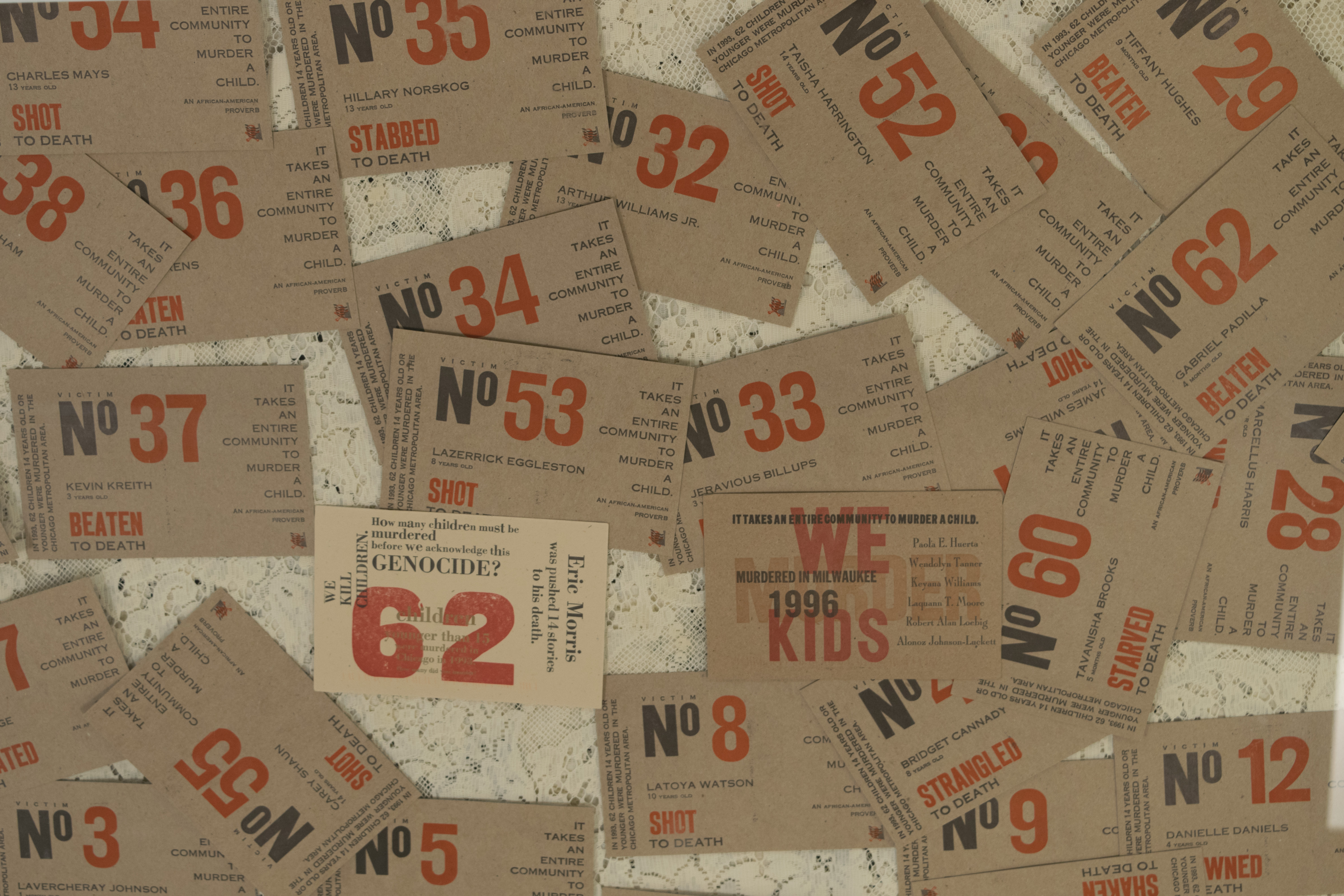 Curated by Vaughan Hennen and the Society of Art Librarianship Students

A closing reception will be held at the Fine Arts Library on Friday, Feb. 26 from 5-6:30pm.

To thoroughly understand the work of Amos Paul Kennedy Jr., one must first examine the context from which he draws.

Kennedy's work is a reflection of his pride as an African American printmaker and creator of artists’ books. Many of his artists’ books are centered around literary works by people of African heritage, including poems, fables, and stories. The wide rage of literature that he utilizes shows his vast knowledge of literature and a drive to visually portray the meanings of works. Much of the literature that he uses raises questions of race and class in American society, and may leave the viewer questioning, How do I feel about this central issue and why? and, What would happen if I read this aloud? The posters included in the exhibit feature his views on race in American society, art, and social injustice; many also feature quotes and gain inspiration from prominent civil rights activists.

Kennedy was born in the southern part of the United States and moved to Michigan with his family where he was the only African American student in his middle school. Many questions about race, culture, and society might have been sparked in this environment. After finishing school, Kennedy became a very successful systems analyst for AT&T and worked there for many years.

While on a tour of Colonial Williamsburg with his sons, Kennedy watched as a Williamsburg historical re-enactor created prints with an antique letterpress. After observing the meticulous workings and the ultimate product of the printmaker, he knew what he wanted to do for the rest of his life. Soon after returning from the trip, he quit his job at AT&T and in no time, was studying at the University of Wisconsin-Madison with renowned printer and book artist, Walter Hamady. Kennedy graduated in 1997 with a Master of Fine Arts degree, and in 1999 was hired by Indiana University Bloomington as the first, African American associate professor in the Fine Arts Department.

At Indiana University Bloomington, Kennedy was infamous for distributing Nappygrams (small postcards that tackled everything from social injustice to whimsical jokes about artists), hosting parking lot barbeques, and leading skipping contests.  During his time at Indiana University, Kennedy became close colleagues with B.J. Irvine, the head librarian at the time, and donated a large amount of posters, artists’ books, and examples of his students’ works to the Fine Arts Library.

After leaving Indiana University in 2001, Kennedy settled in Alabama where he was able to practice his craft, learn from others, and tour the US - teaching, speaking, and selling his work. Kennedy now lives in Detroit where he sells and commissions postcards and posters and describes himself as a "humble negro printer."