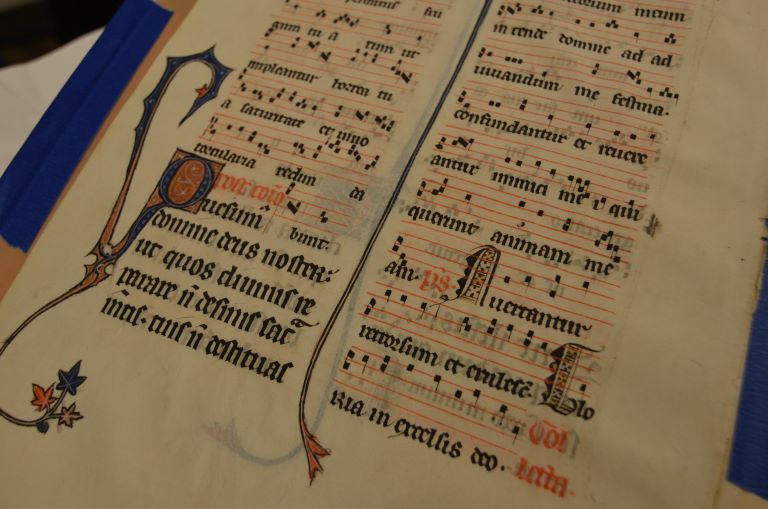 Medieval manuscripts awaken awe within the viewer. Ornamental scallops and borders, illuminated letters, and precision handwriting inspire wonder.  Aged papers and petite drawings elicit questions: Who made this? What is this paper made from?  Where are such treasures kept?

For the past three years,the  Peripheral Manuscripts team has been working together to capture the beauty of these medieval texts and make them discoverable and accessible to audiences around the world, a task that  goes far beyond what any single team member could accomplish working alone.

In January 2020, the Council on Library and Information Resources (CLIR) awarded Peripheral Manuscripts: Digitizing Medieval Manuscript Collections in the Midwest $281,936 to digitize and create item-level metadata for medieval manuscripts from twenty-two Midwestern institutions, focusing on smaller colleges, libraries, and museums that may not have the resources to provide digital access to their holdings. The project, which is part of CLIR’s “Digitizing Hidden Special Collections and Archives” awards, is led by faculty and staff from Indiana University Bloomington, Saint Mary’s College, and Loyola University Chicago.  Though the original project deadline is May 2023, the team will be asking for an extension due to the pandemic delaying their start.

Unwrapping the precious books and manuscripts from white papers, Hebbard, Dalmau, and Alexander discussed the project.

Dalmau explained, “When partners pick up their items, we make sure everything is as expected because they do leave them with us for a few months. That’s big trust.” The grant team takes this responsibility seriously; when a partner institution leaves its materials, the IU team checks their delivery manifest against a project database and takes condition photos of each item. To protect items proposed for digitization, the project started withvisits to each site to estimate not only the number of volumes and fragments but to note their condition. If something was too fragile to be handled or photographed, it was not included.

The grant originally proposed to capture and describe 78 volumes or codices, and 406 medieval manuscript fragments. Today, however, the number of fragments has grown to 615. “Even as early as our initial partner meeting in summer 2020, partners watched one another present their collections,” Hebbard shared, “and some partners realized they could perhaps include something else in the project.” Dalmau added, “By the time we had finished our all-partner kick-off meetings, the partners themselves uncovered additional items, and site visits also upped the numbers with the PIs identifying additional candidates for the project.”

Whereas a codex is a book (as opposed to, say a scroll), a fragment is any part of a larger work that has been damaged, intentionally or unintentionally, and can include one or more leaves of paper or parchment. Hebbard pointed to a paper fragment. “If you illuminate it from the back, you can see the watermark, which is a branding tool for the papermaker. The horizontal and vertical lines come from paper pulp settling over the paper mold, and the watermark is a piece of twisted wire added on top of the mold, so fewer fibers accumulate there.”

Hebbard explained the history of paper, which can be helpful in generally dating an item. “The technology of papermaking was known but not widespread in Europe until the 14th century.” Before that, parchment was utilized. “Parchment refers to any kind of animal skin, and that could be deer, goat, cow, sheep,” she said. The entire animal was used to meet the needs of people, and the skin, once properly prepared, made an excellent and durable writing surface.

The manuscript documents, fragments, and codices in the Peripheral Medieval Manuscript Project originated in Europe, mostly from Italy and France, between the 10th and 16th centuries. A few are in vernacular languages, but the vast majority were written in Latin. The manuscripts range in size from mammoth to tiny. Spines are bedraggled. Some have hinges or other hardware. Pages, too, present in a variety of quality and condition, from vibrant colors popping off the page, to the sheet being blotchy, sallow, and difficult to read.

Alexander showed us a scroll. Looking directly into it from the side, the curled, yellowed parchment looked like an origami rose. Tethered with a leather ribbon, it unfurled to be about 5 feet long and was covered from beginning to end with exacting script. Alexander said that the scroll transmitted a deed.

When unrolled, the scroll is almost 5 feet long. Image courtesy of David Orr

The handwriting on the scroll is beautiful and elegant. It covers the entire document. Image courtesy of David Orr.

Hebbard and co-PI Sarah Noonan had been thinking about the collections of scattered, medieval manuscripts throughout the Midwest for years. They wanted to bring together items often neglected and on the periphery. “Our project has sought smaller partners on the one hand, because they may not have the infrastructure to do this digitization work or the resources to allocate staff and time to do the work either,” Hebbard explained. She pointed out the collections are less well known for the same reasons. “It has been shocking at several points, to look at the number of items that were thought to exist in the collections we are working with, and the number of items that are actually there.”

Hebbard and Dalmau had collaborated on projects previously. When Hebbard brought the idea to Dalmau, there was instant enthusiasm. Dalmau felt it would be “refreshing” to digitize medieval manuscripts, both in terms of the excitement these materials would generate, but also to extend IU Libraries’ digitization practices and processes. Their hope is to build capacity for multispectral imaging in the future.

The Peripheral Medieval Manuscripts Project team members keep a detailed blog of their progress to meet some of their discoverability goals. A recent post shared pictures of the digitization process. In the piece, Dalmau discusses the challenge of digitizing fragile objects and discusses lessons learned. In the beginning, the digitization team estimated they were spending over $4 per page. Months into the project, the cost for capturing a single page was down to a little over a dollar. Arranging items to be scanned was tricky. Dalmau describes it:

Propping materials for consistent capture with color bars, rulers, clips, and page weights entailed an equal dose of wizardry and physics. Admittedly we went into this thinking our greatest challenge would be proper capture of illuminations, but we needed to afford the same level or even greater attention for capturing spines and edges. In those first six months we experimented with yoga mats, snake weights, bone folders, bricks wrapped in archival paper, foam cubes, foam boards, acid-free, black card stock, clips, and glass plates while balancing color bars and rulers.

“One of the reasons I was interested in this project from the beginning is because of one especially well-known fragmentator, or book-breaker, Otto Ege, who operated out of Cleveland.” Hebbard is currently finishing an article about the items in the Medieval Manuscripts Project which Ege (1881-1951) sold. “We’ve digitized about half of the project items, and even within collections  known to have Ege items, we found others that were not previously identified.”

Professor and bookseller, Ege studied art and was especially interested in typography. With an alleged intent to spread the beauty of medieval manuscripts to many, he bought and disbound numerous books. He created portfolios of illuminated and decorated leaves, or pages, and sold them. Ironically, Ege saw these portfolios as educational tools for demonstrating the hisotry of medieval scripts and early print typefaces, though the destruction of books intuitively conflicts with contemporary notions of educational integrity.

Finding a leaf Ege sold singularly or in a portfolio can aid in the reconstruction of a dismembered book. It’s like detective work. “This one is famous,” Hebbard said. “This is a 13th century French missal. A missal is the liturgical book that guides the celebrant in Mass.” She pointed to musical notation. “Not all missals are notated, so although that is not unique, it is a little bit special. This book, known as the Beauvais Missal, was broken by another fragmentator and collaborator of Ege’s, Philip Duschnes, and then dispersed by Duschnes and Ege.” Hebbard referred to her colleague Lisa Fagin Davis, director of the Medieval Academy of America, who has worked in depth on this particular manuscript, and has identified over a hundred of the missal’s leaves. “One of the leaves was found at an estate sale just this summer. Someone bought it for $75.” Of course, the leaf is worth much more.

Hebbard continued, “There are a couple of project items that helped us pin down more narrowly when Ege might have acquired something, based on our partners’ institutional records.” These small clues make a big difference in creating a fuller picture of Ege’s practices and of the twentieth-century market in broken books. The team has also found leaves acquired from other book-breakers not as well-known or documented as Ege.

Every Book Has a Story to Tell

Books contain information, and often, a story. But books as objects themselves also have stories to tell. Some are about the collectors or simply those who owned the volume for a while. “Every single book,” Hebbard explained, “even if it's another copy of a standard text like a Book of Hours, tells us more about who might have commissioned it, owned it or used it by what they wrote in it or even how it is worn and dirtied.” She pointed out that such private devotional books were expensive and “often became inherited objects, and so they accrued family notes over time about marriages, births, and deaths.”

Hebbard said, “Just someone writing their name in the book tells us about a former owner who we would otherwise have no notion of. So yes, every single book tells us more - sometimes frustratingly little more - about the culture that produce it.”

To find out more about the project please see these resources: