The collection spans the history of cinema in the United States and Europe, including both classic and obscure films from France, Germany, Italy, Russia, England, and Scandinavia, as well as the films of the world’s most acclaimed filmmakers. The silent era is represented particularly well by the collection, which contains many short and feature-length films, including comedies produced by Mack Sennett and dramatic films by D.W. Griffith, Cecil B. DeMille, and F. W. Murnau. 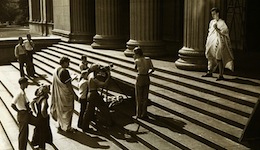 Approximately five percent of the titles in the Bradley Film Collection exist only as 16mm prints, which makes this collection especially unique. These titles are not widely available and many exist only in archives.

The collection also contains the films and original elements of films made by David Bradley. Bradley made two early 16mm features while he was a student at Northwestern. Both 'Peer Gynt' and 'Julius Caesar' starred the young Charlton Heston. Later in his career, after he moved to Los Angeles, he went on to make 'The Madmen of Mandoras', '12 to the Moon' and 'Dragstrip Riot'.

The Lilly Library at Indiana University acquired the Bradley Film Collection in 1997 following the death of collector and filmmaker, David Shedd Bradley.