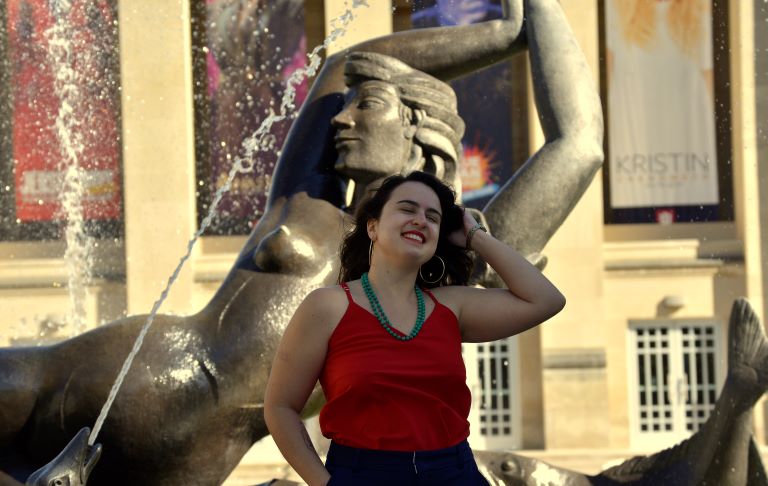 Bruna Kalil Othero Fernandes poses in front of Showalter Fountain on the Arts Plaza, where Lilly Library is one of the main features. Image Courtesy of Filipe Dias Vieira

“The moments I cherish the most are my history with libraries,” Bruna Kalil Othero Fernandes says with excitement. “I have a long history of libraries,” she adds. “Since I was a kid in Brazil and now here: those moments where going to the library without knowing what I was going to take, and then something appeared, caught my eye, and a book I didn’t know about changed my life.” Fernandes sees libraries as an adventure. “The things I research, I first found them on these trips to the library without looking for something specific.”

Fernandes is a Ph.D. student in the Department of Spanish and Portuguese. Last spring, she won the People’s Choice Award in the University Graduate School's Three Minute Thesis competition. The University Graduate School is one of the IU Libraries’ partners and its offices reside on the fifth floor of the East Tower in the Herman B Wells Library, the main library facility on campus.

She recommends undergraduates enjoy libraries and savor them. She urges students to “go to the library and look for something you’re interested in. Not something you must read for your classes or must do research on, but what are you interested in.” She asks the hypothetical student again what they are interested in and follows it up by painting an image for one’s imagination: “What would be a good reading for a Sunday afternoon where you can lay down on the fields of the university and get a little sunshine on your skin?”

Adoring what she calls “the best moments,” Fernandes invites everyone into a library. “They are this room where we can go in without expecting a thing and come out with a treasure.”

A perfect home for this library lover

“I am from Brazil,” Fernandes states. She arrived in August 2021. “The main reason I came was because in Brazil we are having a rough time politically speaking.” She explained how the government funding for intellectuals and artists has been cut. Without a scholarship, Fernandes looked around for other opportunities to support her work. “That’s why I came here,” she says, “And when I first arrived at IU, and saw the structure of the buildings and I saw Lilly Library and all of the things we have available for us to research, I almost fainted.”

“I am a person who loves archives and loves research libraries. In Brazil we do have a lot of archives.” Fernandes energetically discusses her passion. When she worked on her master's degree, she used Brazilian archives. “I went to the archives of the writer I was studying.” She adds, “It was also to touch her diaries and see the manuscripts.” Unfortunately, though she said Brazil has many interesting archival items and manuscripts, “We don’t have money and structure to take care of the archives the way they should be taken care of.”

Consequently, Fernandes feels the multiple archives of IU Libraries are an achievement. “I was impressed with the quality of the work, of the maintaining of the archives.” In addition, she was surprised at the items available. “I went to pick up two books for my research, two Brazilian authors’ books. One of them was the first edition (Rachel de Queiroz), and I said, ‘What? How is the first edition here in Bloomington?’ And the other one was not only the first edition, but the book also had the signature of the writer on it (Julia Lopes de Almeida).” Amazed by what the IU Libraries has on its shelves, she says, “They are historic writers. This book by Julia Lopes de Almeida I found that has her signature on it is not even published anymore. It’s a very rare thing.” So rare, Fernandes imagines calling a publisher and having it re-published.

Broken into three sections, Fernandes notes the section of her research she is currently working on – the contemporary phase – utilizes the Wells Library. “I use the Wells Library. I go there every week, almost every day, searching for new books. I think libraries are so important to research.” She explains graduate students do not have a lot of money. “We don’t have money to buy books. We need access to books even if we can’t buy them. For me as an immigrant here, this is even more important. I don’t know if I will live here or go back to Brazil, so I can’t have lots of books.” She makes the point that though she loves buying books, some books a researcher only needs briefly, so a library is indispensable then as well.

With a laugh, Fernandes shares about her airline flight to IU. “My suitcase was only books! I brought more books than clothes because I was afraid I wasn’t going to find them. These books are essential for my research.” However, she discovered the IU Libraries had the books she needed. “I didn’t expect the library to have so much. It was a very good surprise.”

Next year, she expects to be using Lilly Library more. “I will spend a lot of time at Lilly Library because I will be able to see some of the archives I am interested in. So far, I’ve only gone to Lilly Library for fun. Because for me it is so fun to look at these archives.”

“It’s very funny for me,” Fernandes said about winning the 2022 People’s Choice Award for the Three Minute Thesis, “because it’s a known fact that Brazilians on the internet are crazy. You can’t fight with us. We rule the internet.” When she sent the competition information and her video to her friends, “They started voting like crazy. They sent it to their friends. It was very emotional for me because this was a way for people in Brazil to see what I am doing here.” For friends and family who didn’t speak English, she sent them a translation. She was surprised how many of her friends and family shared it with others. According to Fernandes, the University Graduate School said, “We were blown away by the number of votes. We didn’t expect people to vote so much.” Always quick with a laugh, Fernandes teases, “Don’t joke with Brazilians. We take it very seriously.”

Fernandes was touched. “Winning the People’s Choice Award for me was very symbolic. It shows that people have interest in what I’m doing, and they felt compelled to support me. I was very honored. I was very emotional. The word spread not only here in the United States, but also in Brazil. A lot of people voted in Brazil.”

Of course, putting her research into three minutes was challenging. “I study how national identity was built in Brazilian literature through three historic periods of time. I start in the 19th century where we had our independence in 1822.” Fernandes explains writers created the concept of Brazil. It didn’t “exist in the minds of the people. It wasn’t a country yet.” The essential questions surrounding the first part of her research are questions about how the country was formed in the cultural psyche after they won their independence from Portugal. Fernandes has found it to be Eurocentric, romanticizing the Indigenous peoples.

“The second period is 100 years later – 1922 when we had, I think, the biggest event in Brazilian art. That was The Modern Art Week, which was exactly 100 years ago, 1922.” Wanting to re-invent Brazil and dispense with European influence, Fernandes says the modernist movement provided new layers to Brazilian literature and art. She shares, “The main text I use is the Cannibalist Manifesto (Oswald de Andrade, 1928).  Because these writers go back to a few Indigenous traditions of eating the flesh of the enemy, but not just as cannibalism, but more as a ritual because they thought if you ate the enemy’s flesh you would absorb their better characterizes. If the enemy was strong, you would eat it and then you would be strong and you would be fast and a good warrior.” The writers used cannibalism as an analogy for Brazilian culture.

Fernandes explains the analogy in detail. “We were colonized. We didn’t have the chance to have a culture of our own, so what we do as Brazilians, what we do as Brazilian artists, is that we are cannibals. We eat the influences of foreign countries. We eat everyone and then we digest them. We throw out what doesn’t matter. The result is not genuinely Brazilian because there is nothing genuinely Brazilian,” she elucidates. “But it is Brazil because we are this mix of things.” This is the main idea around which her research revolves.

Lastly, Fernandes describes her ending section. “The third and final moment, which will be the biggest part of my research, is nowadays. We have 1822, 1922, and now 2022.” She muses, “I will discuss how contemporary artists are dealing with this legacy – how we are rebuilding and recreating images of the national identity for the contemporary times.”

For the summer, Fernandes is enjoying yet another library adventure. This time she is exploring the Portugal National Library in Lisbon. Having received a summer scholarship from Luso-American Development Foundation, she is busy in the archives researching Domingos Caldas Barbosa, an often overlooked black Brazilian poet and musician who settled in Portugal.

Find out more about the University Graduate School’s Three Minute Thesis.
Fernandes is also one of the 2021 winners of the Global Citizen Scholarship. Her video is found on their website.