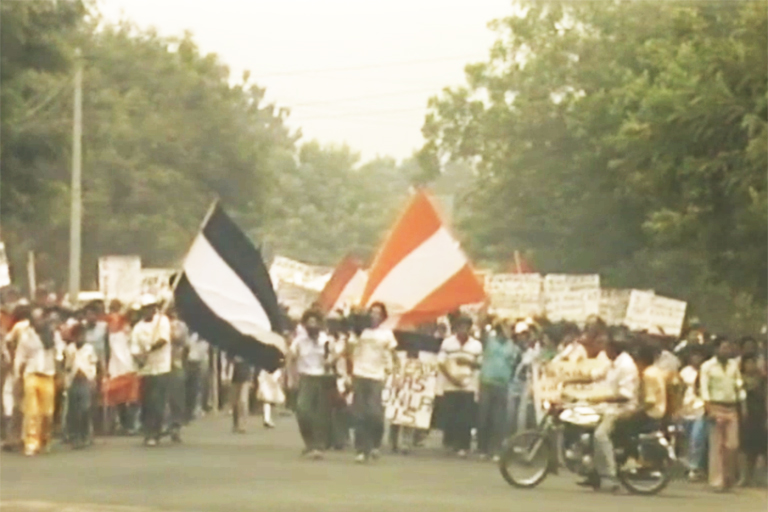 Image credit: A screen captured still image from a video preserved and presented in Achivo Mesoamericano, recorded in 1987 in Managua, Nicaragua.  The video is held by the Instituto de Historia de Nicaragua y Centroamérica.

Mexico. Nicaragua. El Salvador. The physical videos remain stored where they were recorded in Latin America.  Miles away, Indiana University scholars are long-term partners in a multinational effort to preserve, describe, and digitally present the footage.  With effort beginning in 2005,  Archivo Mesoamericano (http://archivomesoamericano.org) was a leading pioneer of annotated digital video archives.

Now safely migrated from its original and nearly obsolete platform, the innovative project relies on a post-custodial model, in which Indiana University Bloomington Libraries delivers the digital content while keeping the original videos in their respective archives. Archivo Mesoamericano is a searchable, digital presentation of rare annotated historical and ethnographic video materials held by the Center for Research and Advanced Studies in Social Anthropology (CIESAS) in Mexico, the Institute of History of Nicaragua and Central America (IHNCA) in Nicaragua, and the Museum of the Word and the Image (MUPI) in El Salvador.

IU Libraries, along with IU’s nationally recognized Center for Latin American and Caribbean Studies (CLACS), have long been active partners in the creation and maintenance of the archive, which is wholly owned by Latin American institutions but hosted by IU.

Appreciation to Luis Gonzalez and Michelle Dalmau for translation assistance.  IU Libraries is responsible for any errors made in translation.

Carlos Henríquez Consalvi, Director of MUPI, explains the importance of the Salvadoran collection, “The audiovisual collections stewarded by the Museum of the Word and the Image reflect the social struggles of the 1970s and 1980s during a time of military dictatorships in El Salvador. Many of the films included in our collection were made by filmmakers linked to the underground 'Radio Venceremos' or by journalists who covered the civil war in El Salvador."

Dr. Edwin Matamoros, Director of IHNCA, also emphasizes the socio-political importance of the Nicaraguan materials, “The videos in IHNCA’s collection correspond to the 1980s in Nicaragua, a period marked by the Sandinista-Contra war. An expression of Cold War politics, the Contras were advised and financed by the Reagan administration. Although the videos were produced by the Sandinista government, they reflect the socio-political reality of that time and hope for better living conditions for all the Nicaraguan people.  At the beginning of the 1990s, the outgoing Sandinista government deposited the audiovisual materials with the Universidad Centroamericana (UCA) in response to a well-founded fear that they would be destroyed by the incoming government.  Since then, UCA, through IHNCA, has stewarded the materials in their original format.”

Migration with help from the Council on Library and Information Resources

Newly migrated and republished in 2020 thanks to an IU Libraries postdoctoral fellowship in partnership with the Council on Library and Information Resources, with the generous support of The Andrew W. Mellon Foundation, Archivo Mesoamericano presents collections of Latin-American video recorded from 1974 to 2007. Documentation of specific instances of political violence, youth movements, the Sandinista government, and guerrilla media are included, as well as topical coverage of areas such as human rights, revolutionary literature, armed conflict, and international relations.

Luis González is the librarian for Latin American Studies at Indiana University Bloomington and has long been involved in the project. He shares that the idea for the archive began in the early 2000s by IU history professor Jeffrey Gould who was aware of raw video footage collected by Latin American institutions.

González said, “The countries were undergoing enormous change, and here were the stories, a rich repository, about emerging social, political, and cultural conflicts.  So, with grant support we were able to establish labs in the partner institutions to digitize the materials on location. All the way, from beginning to end, control of the collections remained with the institutions.”

In particular, IU software allowed for in-depth segmentation and description of the footage, which then became searchable. Importantly, all description and annotation were completed collaboratively with the partner institutions.

“The new open-source platform, Avalon Media System, enhances discovery of these materials. We were able to preserve the video segmentation from the original web site, which increases navigability of the content.  When possible, we generated captions for greater accessibility, and transcriptions that can be downloaded for textual analysis,” said Michelle Dalmau, the project’s Principal Investigator and IU Libraries’ Head of Digital Collections Services.  She added that the extra layer of digital preservation provided by IU Libraries is significant. “The content is protected as digital archival files are managed by the partners as well as at IU Libraries,” she said.

IU Libraries is a long-recognized pioneer in the field of digital libraries, known for its development of services to ingest images and media into repositories, as well as to promote curation, preservation, and access of multimedia materials.

The value of partnership

The Libraries, along with CLACS, support a robust agenda of collaboration with Latin American institutions and libraries. González maintains a vigorous gifts and exchange program of library materials with 17 international partner institutions from Latin America, East Asia, and Europe, and contributes to the Latin American Materials Project (LAMP), a leading international initiative to convert at-risk Latin American research collections into microform and digital formats to ensure their long-term access and preservation.  CLACS supports the Latin American collection through supplemental funding from the Title VI grant for library acquisitions and librarian travel. Additionally, CLACS dedicated Title VI funds for hourly support with translation and subtitling for Archivo Mesoamericano.

As part of the recently established IU Hamilton Lugar School of Global and International Studies, CLACS is uniquely positioned to combine over five decades of commitment to Latin American and Caribbean Studies with an unparalleled depth and breadth of institutional commitment to area, international, and global studies. In addition to its institutional linkages at Indiana University, CLACS has established extensive partnerships with universities and research institutions throughout Latin America, but especially Central America and Mexico.

In additional to its historical value, the footage in Archivo Mesoamericano places an emphasis on the ethno-linguistic and ethno-historical legacy of indigenous peoples in the region, and contains materials that feature endangered languages such as Chinanteco, Mixe, Mixtec, and Zapotec from Oaxaca, Nahuatl from Veracruz, Chontal from Tabasco; Tzeltal and Tzotzil from Chiapas; Pipil from El Salvador; and Miskitú and Mayangna from Nicaragua.