Introduction to the Collection

In 1916, following graduation from Bowdoin College, Alfred Kinsey accepted a two year fellowship at Harvard University to pursue a doctoral thesis on the American Cymipidae or gall wasp. Convinced that sampling studies provided the serious researcher with too narrow a base from which to establish reasonable conclusions on species variation, Kinsey began collecting gall and wasp samples by the thousands. His successful thesis, Studies of Gall Wasps (Cynipidae Hymenoptera), led Dr. Kinsey to accept an assistant professorship at Indiana University's Department of Zoology, where he studied gall wasps, and later human sexuality, until his death in 1956.

The IUB Libraries holds several items relevant to both Dr. Kinsey's gall wasp studies, as well as to his work in human sexuality. His Map Collection is housed in Government Information, Maps and Microform Services, located on East Tower 2 of the Herman B Wells Library.

An example from the collection holdings. 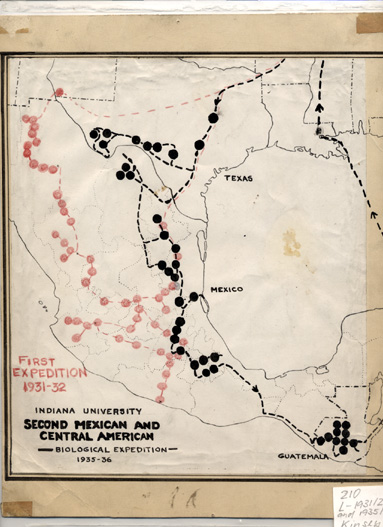 Alfred Kinsey disliked generalizations. "Modern taxonomy," Kinsey wrote in Sexual Behavior in the Human Male, "is the product of an increasing awareness among biologists of the uniqueness of individuals." Rather than gloss over variations within species, Kinsey instead sought to exhaustively catalog these differences, providing to the biologist, and later the social scientist, a survey of an entire group.

"It is the function of the taxonomist to show the magnitude of the whole group which he has studied, so specialists will know how large an order must be satisfied if their generalizations are to apply to any significant portion of that group."

Just as he disliked generalizations, so did Dr. Kinsey strive for integrity in social statistics, railing against a bias in academic observations and experiments toward "college students, of college age, mostly from middle-class and urban homes--often with the sex unrecorded.

This philosophy drove Kinsey's undertaking of collecting millions of gall wasps during his early research, and was fundamental to his approach in interviewing thousands for his works on sexual behavior.

Five pages from Dr. Kinsey's Sexual Behavior in the Human Male relating to his taxonomic beliefs have been digitized and are available here in PDF format. [Male report excerpt]