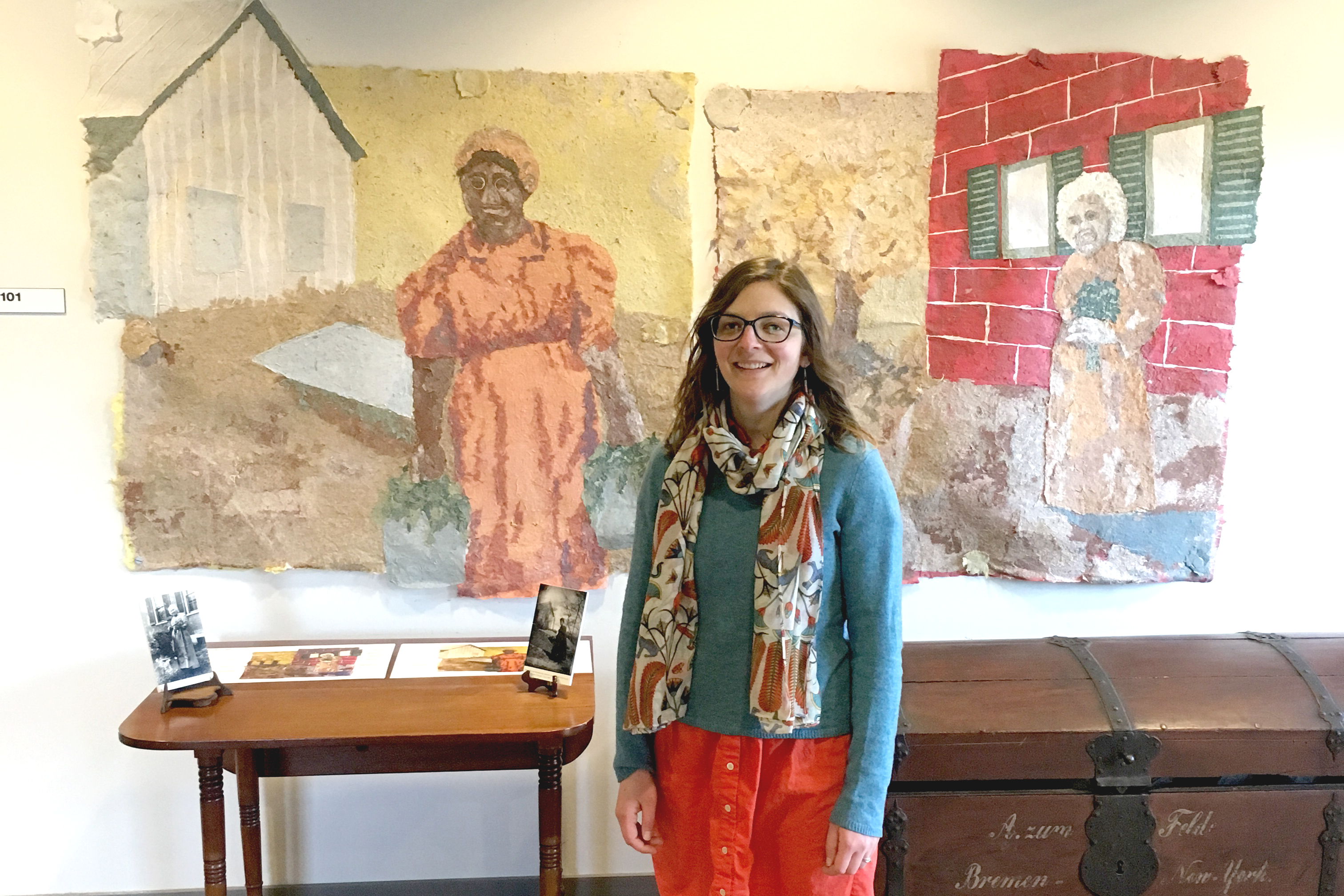 “I feel like a black and white photograph in a historical house is not an uncommon or unexpected encounter, and so it's a little bit easier to brush by like it's part of the landscape of this place.  ... I wanted to bring them to life with color.”

- Laura R. Post, pictured above with her murals titled, "Lizzie in Spring" (left), and "Tending the Garden" (right).

“We all think we know what a historic house visit is going to be, and we expect to find the same kinds of things in each of them, or have the same kind of experience,” Carey Champion, Director of the Wylie House Museum suggests.

The restored 1835 house in her care was the home of Indiana University's first president, Andrew Wylie, and in the tradition of historic homes offers a tour and look into daily living in Bloomington, Indiana, in the 1800s.  But it does not stop there.

An unrelenting quest for active and evolving interaction with the historic property has added layers of uses and impact for the home and adjoining barn-turned-education-center. Spaces are used as college classrooms, heirloom teaching gardens, maker spaces, research archives, concert venues, quilting studios, seed-saving workshops, and even as contemporary art galleries.

A wide and generous view of possibilities and partnership invites all IU faculty to conceive of Wylie House academic interactions. “I see so much potential, and I want the house to be used for both historic study and for inspiration,” says Champion. “We know history must be seen through a contemporary lens, and the arts help us do that.”

Planting the seeds of learning

One artist in particular helped the Wylie House with its contemporary perspective as part of IU Bicentennial celebrations.  Laura R. Post, faculty lecturer at the Eskenazi School of Art, Architecture + Design, had a project in mind, and IU’s Bicentennial Office was ready to help fund it.

“At a  smaller scale I was using invasive plants to create pulp paintings,” she explains. “I wanted to tell our IU story using local plants, and here is the Wylie House, closely related to both campus history and plant history through its historic garden. The IU Bicentennial grant allowed me to realize this vision in a big way.”

Post found a warm welcome at the Wylie House, and soon added support from IU’s Office of the Bicentennial to launch her project, Diversity and Biodiversity of Indiana—Papermaking with Local Plants to Tell Our Story.  Her plan included workshops, both on campus and in the community, to teach the paper-making process while also raising awareness of the dangers presented by local invasive plants. Her next step was to determine the subject matter for the project’s signature art pieces to be displayed at the Wylie House: large-scale portraits created with paper pulp hand-made from local invasive plants.

Primary source materials held at the Wylie House offered her a story to illustrate.  “I learned about Lizzie Breckenridge. There was something about this idea that there was a woman who was a domestic worker for the Wylie family, and got paid for that, which was unusual at the time,” Post says. “I wanted to focus on the gardens, and I am sure she was a very important part of maintaining and developing all of the gardens at the Wylie House.”

It was no accident that Elizabeth “Lizzie” Breckenridge’s story was visible to the artist.  The Wylie House holds decades of personal Wylie correspondence occasionally referencing her role in the family life, which spanned nearly fifty years. As part of a commitment to inclusive interpretive history, photos of Breckenridge are conspicuous in the home and in digital exhibitions.

Post joined her outdoor portrait of Lizzie with that of another Wylie House resident, Louisa Wylie Boisen, who was the daughter of Theophilus and Rebecca Wylie and one of the first women to graduate from IU.

Champion appreciates the story the murals tell when placed together. She says, “In the spirit of the project, they were both gardeners on the property. It is such an interesting way to learn about two women who actually lived together in the Wylie House in the 19th century.  Art helps us do that kind of learning, and Laura’s work, especially, brings them to life in a new way.”

The finished murals are colorful, unexpected, and undeniably contemporary. That is intentional. Post has no desire for her work to blend in with the historical objects already on display.  “I feel like a black and white photograph in a historical house is not an uncommon or unexpected encounter, and so it's a little bit easier to brush by like it's part of the landscape of this place,” she says. “I wanted to focus on the gardens and so the pieces are set outside, and they are based on photographs of the Wylie House. The photographs are just black and white and I wanted to bring them to life with color.”

"The Asian Bush Honeysuckle is very golden and it's a really beautiful fiber, but if you mix that with denim from old blue jeans it makes a green - it actually mixes the way that paint does," Post said.

Indiana invasive plants used in the murals include Japanese Knotweed and Callery (Bradford) Pear, as well as the Asian Bush Honeysuckle. Although not invasive, flowers from the Wylie House Heirloom garden were also used for texture and beauty in the paper pulp.

Bringing Lizzie and Louisa back to the Wylie House

Recent life adventures have taken Post to a new faculty position at the University of Texas at Arlington. While the artist has moved away, she hopes that soon her work will have a permanent residence at the Wylie House.  Thanks to a newly established Wylie House Collections Fund and an IU Day crowdfunding campaign, IU may soon be able to purchase authentic versions of the original murals, sized for portrait-gallery display.

The fund was established following another 2019 contemporary exhibition, Call and Response, and was first used to purchase the Wylie-house inspired art from that temporary exhibition for a more permanent installation in the house. Similar to Post's pieces, these works of art help tell the stories of the lesser-known and marginalized people associated with Wylie House history.

Like the Call and Response interpretive pieces, Post hopes her contributions teach more than history to future visitors.  She says, “I'm hoping that it will cause people to give a little more space for understanding those original occupants, and then also there's this whole other conversation about what the portraits are made of – local invasive plants.  It’s an intersection of the history and contemporary ecology of the place.  I hope that these pieces will continue to bring threads together of these different aspects -  history and art and biology and ecology - and then spark new conversations.” 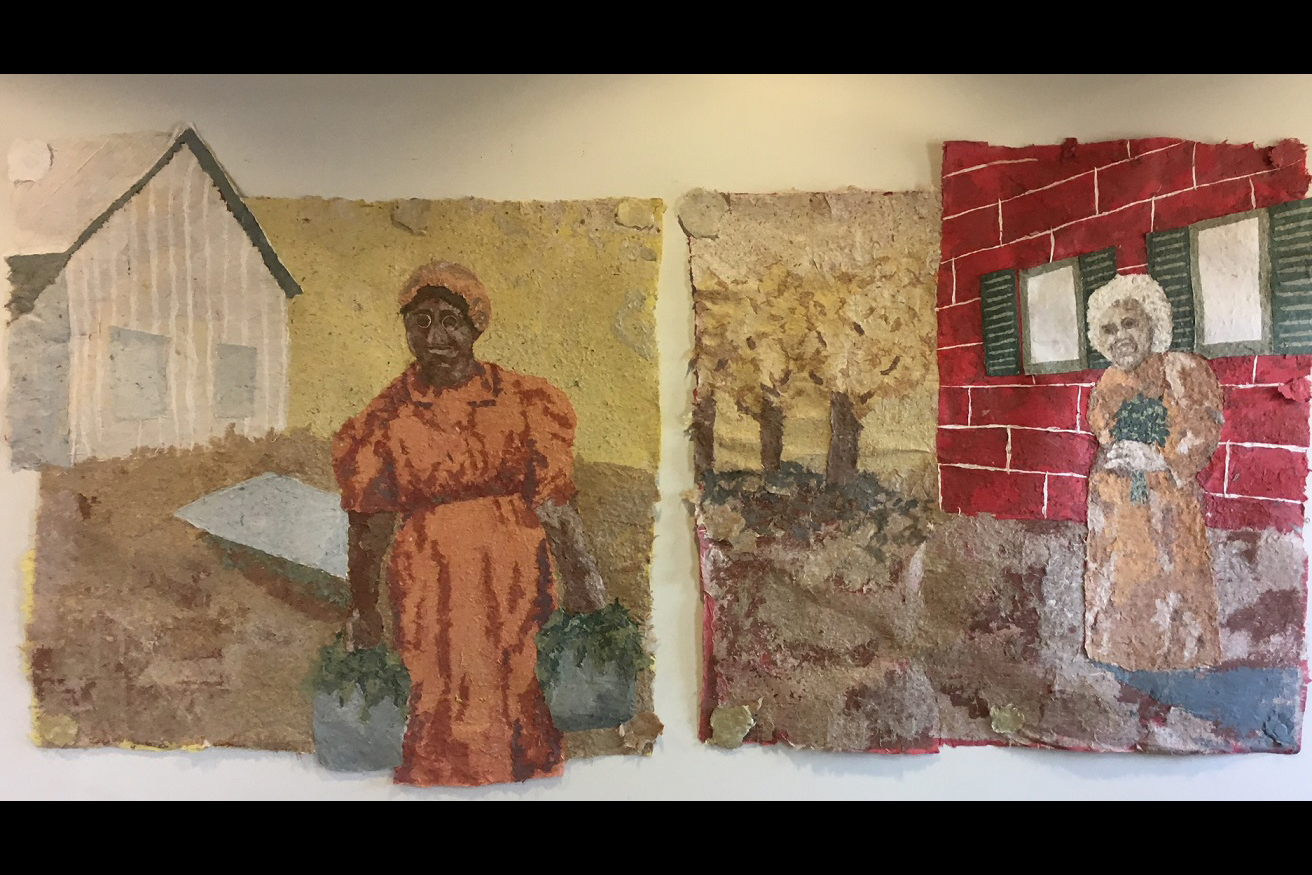 Support contemporary art and inclusive interpretation, as well as ongoing preservation of authentic historical objects at the Wylie House through the Wylie House Collections Fund.