Since 1961, the Association of Research Libraries annually publishes statistics collected from its members describing the collections, staffing, print and electronic materials expenditures, and service activities of its member libraries.  Many of the numbers shared here were collected by IU Libraries as part of this important benchmarking activity. The ARL is a nonprofit organization of 124 research libraries at comprehensive research institutions in Canada and the US sharing similar research missions, aspirations, and achievements.

IU Libraries is 12th among public academic libraries in North America, and
6th in the Big Ten Academic Alliance as measured by expenditures.

This page offers two ways of looking back.  For detailed data and charts, scroll down beyond the timeline. To see our stories and progress, click right to advance the timeline below.

On March 21, 2020, IU Libraries closed all physical library buildings to employees, faculty, and students for the remaining months of the fiscal year.  This closure impacted many of the statistics reported annually by IU Libraries, given the sudden ceasing of measured activities. The data shared on this page is from our most recent fiscal year, the period of July 1, 2019, through June 30, 2020.

Despite the challenges of 2020, we have continued our service as a relevant, high-functioning library system, resilient in the face of the unexpected.

Work is approaching completion for the second phase of IU's ambitious effort to digitally preserve all significant audio, video, and film recordings on all IU campuses by the IU Bicentennial in 2020.
Data below reflects project status as fiscal year 2020 came to an end. 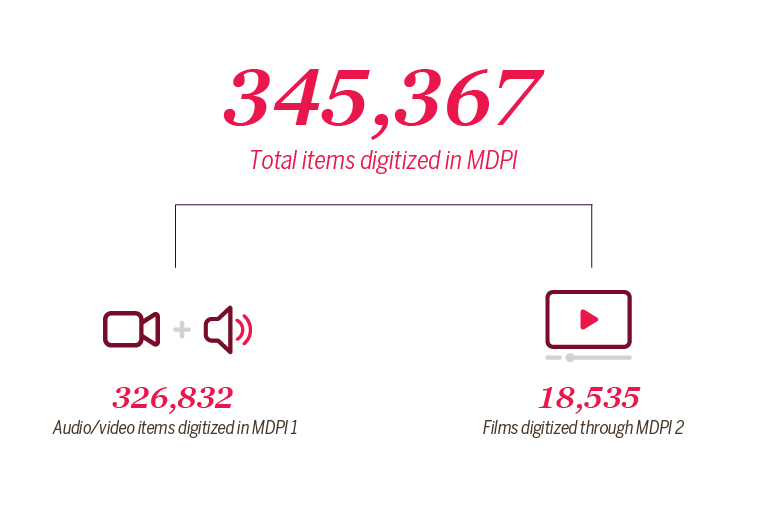 Phase one of the IU Media and Digitization Preservation Initiative, focused on audio and video formats, is complete. Extended efforts are directed to secure IU's film collections from units such as the Archives of African American Music and Culture, the Lily Library, University Archives, and of course, the internationally-known IU Libraries Moving Image Archive. Film collections at regional IU campus are also part of the ambitious project scope. After digitization is complete, preservation specialists review digital files to add metadata, review rights ownership, and where possible, make available through IU Libraries Media Collections Online. More than 25,000 films will be digitized for preservation in phase two, adding to the more than 330,000 audio and video items already digitized.